Apple today released the fourth beta of iOS 7, which begins a number of improvements, changes, and bug fixes to the operating system, including a designed lockscreen, Notification Center improvements, an updated look for Safari’s bookmark menu, and more.

iOS 7 beta 4 also brings a slew of minor interface tweaks and improvements that make the fourth version of the beta feel both faster and more polished. Our forum members have noted multiple enhancements that have been bundled into the release:

Lockscreen - Slide to Unlock has been updated with a shifting highlight color and an arrow that draw attention to the area on the lockscreen. The arrow that denoted the Notification Center is now a line shape. 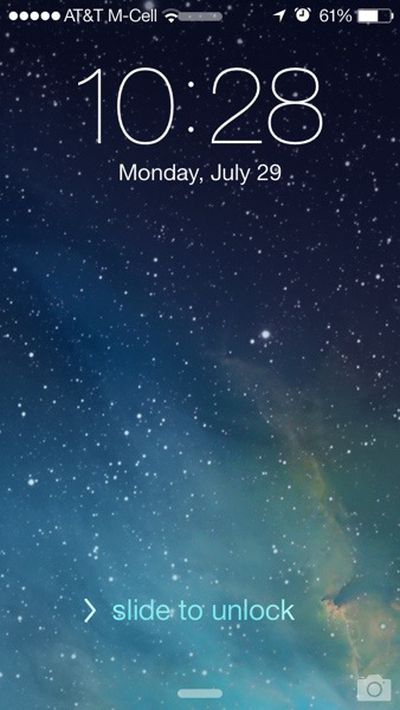 Mail - Swiping to delete inbox messages from the Mail app is quicker thanks to a smoother delete animation that eliminates slight lag.

AirPlay - There are new AirPlay icons.

Folders - The fade animation for folders located in the dock has been updated to function properly.

Phone - The Call button has been slightly altered to take up less of the phone’s screen and the Answer/Decline buttons have also been updated.

Messages - Messages app now uses the first name and last initial of a contact in a chat conversation rather than the full name.

Search - The iPhone’s search functionality (initiated with a downward swipe on the screen) now includes a "Cancel" option.

Safari - Buttons for Bookmarks, Shared Links, and Reading List have been redesigned with icons rather than labels.

Apple TV - iOS 7 includes a feature that allows an Apple TV to be automatically set up using an iPhone or iPad via Bluetooth. (Thanks, Ethan!)

Additional features in iOS 7 beta 4 will be added here as they are discovered. Apple is likely to continue pushing regular updates for iOS 7, bringing minor performance boosts and changes ahead of the operating system’s public release, which is expected to come in the fall.

AngerDanger
I still wish they changed the Photos icon to the one on the right. :(

The update to the messages app show the first name and the first initial of the last name.

In my contacts, I have:
Eric Wood
Eric Williams

If the messages app reduces the name of both to "Eric W" how am I supposed to tell who I am talking to easily. I think this update needs to be reverted, like "NOW" because that is going to cause a lot of issues. :mad: :eek:


You should just stop being friends with one of the guys and delete them from your contacts.


You don't see the difference? Really?
Score: 12 Votes (Like | Disagree)

ryant601
Also added back is the option to shuffle all songs of a certain artist. For example, we can now shuffle all Led Zeppelin songs. Before we were limited to playing certain albums shuffled. Bothered me.
Score: 11 Votes (Like | Disagree)

840quadra
Honestly not a fan of the Screenshot API fix. I don't use Snapchat, but IMO it's none of anyone's business if I take a screenshot on my device.

As far as the other updates are concerned, be curious to hear feedback from the Dev community on the continued improvements, or any new bugs. Really hoping for speed, stability, and battery life improvements.
Score: 11 Votes (Like | Disagree)

My goodness but that is some seriously ugly screenage.

Swiping away notifications is "new" for iOS? Good grief...