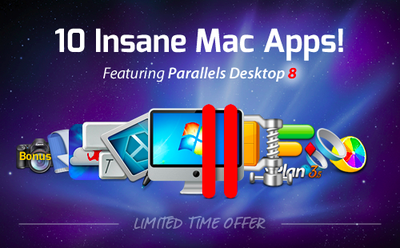 StackSocial has launched its Summer 2013 Mac Utility Bundle which includes 10 Mac Apps, including Parallels Desktop 8, for $49.99. The total retail value for the package is $482. The apps in the bundle are:

The $49.99 price represents a discount on full price of Parallels Desktop 8, but also includes these other apps.

ValSalva
Is it me or does Parallels seem to be in almost every bundle lately?
Score: 6 Votes (Like | Disagree)

Hrim
After so many years, I must ask.

Who buy these? I'm from PC and have a mac since more than a year, and yet I fail to understand why such apps are so expensive.

"Types frequent text for you". Does anybody actually parrot that much on a keyboard ? I can imagine the people thinking "Phew, hopefully my 33$ software will avoid the diresome situation where I must explain once again why you should not feed Gizmo after midnight".

What about this one:
"Who doesnt love being able to find, organize and browse the thousands of documents on your Mac? Enough said."
Yeah, that's such a great deal. I was stuck with my mac being unable to browse files, since Apple removed Finder.app from their OS.

I'm pushing it, but you can get the idea.

Seriously, 30$ for WINZIP? Who needs to zip that badly?
Score: 3 Votes (Like | Disagree)

foto-max
Of course Parallels 8 is on sale... As soon as OS Mavericks is released in a couple of months, they will mandate that you purchase Parallels 9. This happens like clockwork.......:mad:
Score: 3 Votes (Like | Disagree)

Is it me or does Parallels seem to be in almost every bundle lately?


You're not the only one. In fact, I don't think I've ever seen VMWare Fusion in any of the bundles, and it's a toss between Parallels and TechTool Pro for the "top end" app that's the only one worth buying the bundle for.

The month after Parallels will be in the Fall bundles... like clockwork! :-)


I can see that happening.

As usual though, this bundle is round about crap unless you seriously wanted at least two of the apps, or you just want Parallels for half off.

I think the last bundle I bought had SnapzPro, Pixelmator, and CoverSutra in it for $40. A nice deal at the time given that i was still in college and couldn't afford Photoshop, needed screen capture, and iTunes (?) wasn't as nice looking as CoverSutra was.

Now, as mentioned, it's really just buy the top end app for half off, and leave the others behind.
Score: 2 Votes (Like | Disagree)

Of course Parallels 8 is on sale... As soon as OS Mavericks is released in a couple of months, they will mandate that you purchase Parallels 9. This happens like clockwork.......:mad:


With the most recent upgrade, Parallels 8 works on Mavericks, so you are safe with 8 until OS 10.10.
Score: 2 Votes (Like | Disagree)
Read All Comments