The U.S. Patent and Trademark Office today published an Apple patent application (via AppleInsider) filed in February of this year which addresses a system for packaging fingerprint sensors alongside conductive bezels in a single structure. The bezels deliver a small amount of electrical current to the user's finger, allowing the fingerprint to be read by the sensor.

The present disclosure is related to integrated circuit packaging, and more specifically to methods and apparatus for integrally molding a die and one or more bezel structures, with portions of each exposed or at most thinly covered, for fingerprint sensors and the like. [...] 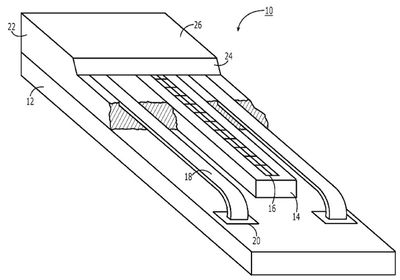 Fingerprint sensor package with sensor die (14/16) and conductive bezels (18)
The patent application goes on to describe some of the issues with previous fingerprint sensor assembly methods:

Current fingerprint sensor structures require a number of discrete assembly steps. As the number of discrete elements and manufacturing steps increase, manufacturing cost increases and the potential for faulty or inaccurate assembly that negatively affects product consistency and yield losses increase. Discrete element sub-assembly is also a more time consuming process than integrated manufacturing. As in the general art of IC production, there is significant, ongoing commercial pressure to reduce cost, number of components, and number and complexity of manufacturing steps, and size of the completed structure.

Furthermore, the separate bezel and encapsulated die structures are often undesirably large final devices. Further still, it is desired that the bezel be as physically close to the sensors as possible to optimize the sensitivity of the sensor.

Cross section of finger on integrated sensor package
While the patent application was filed in February of this year, it actually appears to date much further back, as it is a continuation of a previous patent application filed in March 2010 and originally assigned to UPEK, Inc. That company was a 2004 spinoff of STMicroelectronics' fingerprint biometrics business. UPEK merged with AuthenTec in September 2010, and Apple ultimately gained the rights to the intellectual property when it acquired AuthenTec last year. Only one of the three inventors on the patent, Giovanni Gozzini, continues to work for Apple today.

Jazwire
Given the latest government snooping news, not sure I want my fingerprints easily available.
Score: 15 Votes (Like | Disagree)

Oh boy, here we go with getting defensive about seeing facts!
Seriously... grow up. :rolleyes:

Yes... in this instance, Apple is copying a feature that has been used on a mobile phone before.

Let's just hope their implementation is better or it will disappear just as fast as the one on the Atrix did.
Motorola dropped the feature on the Atrix 2.
Score: 11 Votes (Like | Disagree)

SPUY767
In 2 years when everyone is doing fingerprint scanners like this, it will suddenly have been obvious.
Score: 10 Votes (Like | Disagree)

Given the latest government snooping news, not sure I want my fingerprints easily available.


LOL, I am pretty sure the government already has most ppls finger print already.
Score: 9 Votes (Like | Disagree)

Given the latest government snooping news, not sure I want my fingerprints easily available.


Don't worry. Fingerprint sensors don't store finger prints. Just like Mac OS X does not store your password. In both cases the data are "hashed" and only the hash is saved. If some one looks at a hash they can not know the password or finger print.

I realise this is a long shot, but please make it happen in the 5S.

Entering the passcode may be a first world problem but it is nevertheless tedious. The more of a rush I'm in, the more likely I am to get the darn thing wrong.

I bet you will see this technology on door handles too. Keys are a hassel to cary around. Why not program the doors on your door and house to only open for the "right" people. No "swipe" the entire part of the handle where you grab it could be a sensor.
Score: 7 Votes (Like | Disagree)

In 2 years when everyone is doing fingerprint scanners like this, it will suddenly have been obvious.

Motorola did it two years ago on the Atrix. ;)
Nice feature, just poor location of the sensor. (it was integrated into the power button)

Saturday February 4, 2023 10:05 am PST by Eric Slivka
Online retailer TigerDirect has slashed pricing on the M1 iPad Air in several colors, offering the base 64GB configuration for just $313.99 in Purple and Pink. Note: MacRumors is an affiliate partner with TigerDirect. When you click a link and make a purchase, we may receive a small payment, which helps us keep the site running. That's a savings of 48% compared to Apple's normal $599.00...
Read Full Article • 506 comments

Sunday February 5, 2023 6:06 am PST by Hartley Charlton
A new version of the Mac Studio with the "M2 Ultra" chip is unlikely to arrive in the near future, according to Bloomberg's Mark Gurman. In the latest edition of his "Power On" newsletter, Gurman explained that since the upcoming Apple silicon Mac Pro is "very similar in functionality to the Mac Studio," Apple may wait until the release of M3- or M4-series chips to update the machine, or...
Read Full Article • 429 comments