Apple's Messages app for OS X has received a significant amount of criticism since its introduction last year as the evolution of iChat. The app has suffered from a number of issues including loss of messages, out-of-order message display, poor synchronization among iMessage devices, and search problems.

While Apple has addressed a few of these issues, such as the out-of-order message addressed in OS X 10.8.4 earlier this month, a number of them remain, perhaps most notably the searching issue. For users with significant numbers of messages, searching can easily cause the entire Messages app to lock up, requiring the user to forcibly quit the app. Even in instances where the app remains functional, navigating results is difficult and awkward, with a lack of filtering options to help narrow down results. 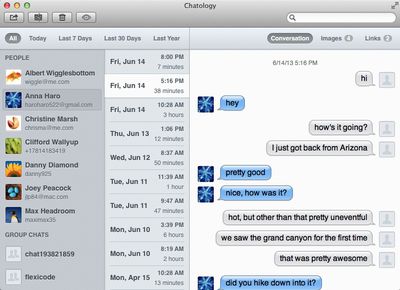 Flexibits, the development team behind the popular calendar app Fantastical for Mac and iOS, has taken on the task of fixing searching in Messages with a new Mac app, Chatology, launching today. Chatology is a standalone app that directly accesses the user's Messages database to provide fast and flexible searching.

"We made Chatology because we were so frustrated searching for our messages," said Michael Simmons, Co-Founder of Flexibits. "There were no solutions to fix this so we created one, and we think all Messages and iChat users are going to love Chatology as much as we do."

With instant search capabilities, the ability to filter by images or links, and much more, Chatology is the fastest way to find all of your messages.

Search options in Chatology allow users to search by name or message content, and then optionally filter results to the current day, past seven days, past 30 days, or past year. With a conversation selected, users can easily switch between viewing the conversation in its entirety or just all images or all links from the conversation.

Chatology is also able to tie into Messages in some ways, reading the status of Messages contacts in order to show whether they are currently online or not, as well as optional keyboard shortcut integration that allows Messages users to launch Chatology by simply pressing command-F while in Messages.

Chatology has one primary function, and it does it well and quickly, but many users may hesitate when they see the app's $19.99 price tag. We chatted with Flexibits' Michael Simmons about the pricing decision, and he noted that it was based in large part on the amount of work required to develop the solution to Apple's search issues. Simmons says:

This is a tool that solves a problem that, if you have the problem, you probably *really* want this solution. It wasn't simple to develop (as you can imagine) so we think $19.99 is a fair price considering the frustrations Chatology eliminates. We think anyone who uses Messages or iChat that is looking for a past chat is going to want Chatology.

One other issue to note with Chatology is that is only available through the Flexibits Store and can not be sold through the Mac App Store due to Apple's sandboxing policies that would prevent an app like Chatology from accessing the Messages database.

With OS X Mavericks also now available as a developer beta, potential Chatology customers may also be curious about whether Apple will solve Messages' issues for the upcoming release, but with much work left to be done on Mavericks it is unclear how the final version will perform. Simmons notes that he is hopeful Apple will make the needed improvements, pointing out that Flexibits would have preferred to "not have to write an app like Chatology and have functionality like this built right in."

Chatology is available now exclusively from the Flexibits Store and is priced at $19.99. A 14-day free trial is also available.

The Phazer
Good example of why the sandboxing requirements of the Mac App Store are a bad thing.

stevemiller
apple giving us a bug ridden piece of software stinks, but someone charging more than the cost of the entire OS for a band-aid fix stinks even more.

its not like instant messaging is new or complicated. i don't understand how its so difficult/expensive to get right in this day and age.

p.s. 10.8.4 most definitely did NOT fix the out of order issue. happens just as frequently as it did before, with new messages that have arrived since the update.
Score: 3 Votes (Like | Disagree)

cmChimera
Cool, but too expensive.
Score: 3 Votes (Like | Disagree)

All it does is read your Messages logs which are stored on your computer, whilst offering a nice GUI for searching and browsing chat history, which Messages.app sucks at. It's not hacky at all. Hell, you can open Messages logs with TextEdit and read them like that.


Which makes it a hack. Apple doesn't have any published documentation on how they store these files. There's no public APIs. There's no reason to believe that Apple won't spontaneously and regularly change the way the files are stored. That's why apps like this aren't allowed on the App Store. They make assumptions about how files are stored that may or may not be valid.
Score: 2 Votes (Like | Disagree)


In the words of Barney Frank, "On what planet do you spend most of your time?"