The company has now announced that its Logitech Gaming Software is now available on OS X. 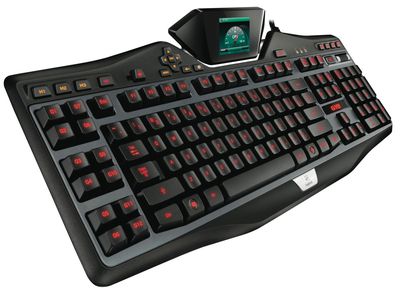 The top of the line models are the $100 G700s Rechargeable Wireless Gaming Mouse and the $200 G19s LCD Gaming Keyboard.

Today, we are excited to share that Logitech Gaming Software (LGS) has been updated to support Mac OS for our full keyboard and mouse lineup. Now Mac gamers can enjoy the same great personalization and customized control our PC customers have come to reply on. You can download the latest version of LGS from the Logitech support page for each compatible product.

Several of us on the gaming team switch back and forth between Mac and PC, so we’re thrilled to have this support on both platforms. We can’t wait for you to now have the option to experience your favorite Logitech gaming accessories on Mac.

The G19s keyboard, for example, includes an LCD screen to monitor game statistics, custom-color backlighting for keys, and a number of custom programmable keys. The G700s mouse runs over a wireless connection, but can recharge batteries and continue working at the same time, with a number of programmable thumb controls on the side, and more.

Both are available from Logitech's online store and elsewhere.

The proper pointer device for using a Mac is a trackpad. I love my three and four finger gestures. It's downright fun to use (without even launching a game.)

I've never felt a need to have additional buttons on my keyboard... Why would I? In game the controls can all be mapped to the 60+ keys already on a standard keyboard.


In my opinion, a trackpad can't compare to a mouse in games where you control the camera, such as Left 4 Dead 2 or even World of Warcraft.
Score: 8 Votes (Like | Disagree)

class77
All my mice are Logitech and I think they're the best/smoothest on the market
Score: 6 Votes (Like | Disagree)

The proper pointer device for using a Mac is a trackpad.


Trackpads suck. Yes, even Mac ones. I hate my trackpad on my Macbook Pro. They're mostly miserable to use. I'll take my 5-button Intellimouse over that crap any day of the week. The only thing I like about a trackpad is side-to-side scrolling and a couple of gestures, but trying to do a right button click with two fingers is just awkward compared to a dedicated right mouse button, let alone the middle mouse button which is irreplaceable for most first person shooter games. I mean the very idea of trying to play a 1st person shooter with a trackpad is laughable. Frankly, it'd be better to have a touchscreen setup with the Mac than a trackpad. At least then a game like Bejeweled could be played quickly and easily like on the iPad/iPhone whereas it's slow going by comparison on a trackpad OR a mouse. And just try drawing and editing in Photoshop with a trackpad. It's miserable since it lacks precision trying to move and press the entire trackpad as a button or lift your finger up, etc. whereas you just glide and click with a mouse (drawing pads using stencils are different, of course).

Thus, in conclusion, the very idea that a trackpad is "proper" is such a joke it's unreal. Yes, notebooks come with trackpads. That doesn't make them "proper". Up until recently, all other Macs came with mice (admittedly Apple mice have always sucked since they could never admit that one button is stupid and always has been always will be and that hiding a second button just shows how much they refused to acknowledge the truth rather than any indication that yes, a second or even a 3rd button is needed. And frankly, I couldn't do without my roller wheel. Two finger scrolling is OK, but it's too easy to move your hand sideways a tad and the next thing you know you're off center on a large web page and that is irritating.
Score: 1 Votes (Like | Disagree)

The proper pointer device for using a Mac is a trackpad. I love my three and four finger gestures. It's downright fun to use (without even launching a game.)

I've never felt a need to have additional buttons on my keyboard... Why would I? In game the controls can all be mapped to the 60+ keys already on a standard keyboard.


The proper pointing device for anything other than casual surfing and consumption is a mouse. Doing any sort of real work, or any gaming requires the speed and accuracy of a mouse... clearly you're not much of a gamer either since you can definitely make use of a couple side buttons plus the usual right and left click.
Score: 1 Votes (Like | Disagree)

mrxak
I like the idea of these keyboards. Unfortunately I kind of hate their design. There is too much bulk around the keys, and the F-key groupings are bad. Also the escape key is too small and no command key.
Score: 1 Votes (Like | Disagree)
Read All Comments