The New York Post reports that Apple has been seeking to undercut its potential competitors with regard to royalty rates for its rumored streaming music service, currently offering a rate that is just half that paid by Pandora despite rumors that Apple is looking for more flexibility than allowed under the license used by Pandora.

The tech titan, the most valuable company in the world, made an initial offer to the label of about 6 cents per 100 songs streamed, sources said.

That’s about half of the 12 cents per 100 songs paid by Pandora, the leading online radio service that Apple is taking aim at, sources said. [...]

By comparison, terrestrial radio-backed online services — such as iHeart — pay about 22 cents per 100 songs streamed.

The report claims that Apple had hoped to have its so-called "iRadio" service ready for the iPhone 5 launch, but was forced to slow down its timetable due to the difficult content negotiations. Sources indicate that Apple would like to bundle iRadio with the existing iTunes Match service, although iRadio would also be ad-supported. 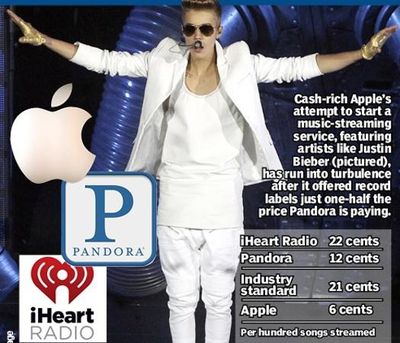 Pandora has been seeking to lower its royalty payments, arguing that the current structure does not allow it to earn a profit on its service. The company has noted that it pays out a much higher percentage of its revenue in royalties than satellite service SiriusXM does, leaving essentially no room for profit once its other costs are accounted for.

Pandora currently takes advantage of a compulsory licensing option that permits it to broadcast any music it wishes without having to strike individual deals with record labels, but license places significant restrictions on content, preventing users from requesting specific songs, rewinding, or skipping more than a handful of songs per hour. Apple is reportedly seeking a much more flexible arrangement for its users, but labels are reluctant to sign on at the rates currently being offered by the company.

Update 10:14 AM: The New York Times reports that Apple's plans are indeed still being delayed due to the ongoing negotiations.

Apple had hoped to introduce the service early this year, but now it is not likely to reach the market until the summer, if not later, according to these people, who spoke on condition of anonymity because the talks were confidential.

Update 1:59 PM: Bloomberg corroborates word of the delay, noting that Apple still intends to launch the service later this year.

Apple Inc. delayed the start of an online radio service to compete with Pandora Media Inc. after talks with music labels stalled, according to four people with knowledge of the situation.

The company still seeks to start the advertising-supported radio service by the end of the year, said the people, who asked for anonymity because the plans haven’t been made public.

Jimrod
Can someone start paying me for having to see and hear Justin Bieber? I consider it some kind of cruel torture that deserves compensation. Please just fast-forward him to the fat/drunk/drugged up reality TV desperation version of 10 years from now.
Score: 31 Votes (Like | Disagree)

This should be the flagship feature in iOS7. It could be a true game-changer.

If "playing catch-up" = "game-changing innovation", then I agree wholeheartedly!
Score: 24 Votes (Like | Disagree)

Honestly, I don't care what Apple pays as long as the service is good and offers variety at a good value to us... the consumer.

Bring it on and more!

On the face of it, 6 cents per hundred songs seems absurdly low compared to the other services. But I assume Apple is banking on its massive user base, as if they're buying in bulk. I can't imagine the recording industry going along with that price. I could see that as a low-ball offer, with the actual amount ending up higher.


No what they are banking on is this explanation. Pandora is going out of business based on the prices for content you are charging them. So don't compare our offer to theirs, because theirs is a temporary illusion. Now Pandora and Spotify have special places in the marketplace with investor capital can be used to fund the companies at a loss, potentially for a few more years. But eventually that ends. Apple is suggesting that this is price point where a real company can come in and resell the content and make money.

However, this is a crushingly low amount of revenue for the content. Only a fraction of this would ever make it back to the artist creating the song. Even if you had a hit that got played, for example, 100,000 times in a year. The artist would probably do better setting up shop in the subway with a hat on the floor for a week.

So basically it is unclear that streaming even works as a business model.
Score: 12 Votes (Like | Disagree)

jav6454
C'mon MR Bot?! Put a pic of Adele, or someone notorious for being good not some wanna be. Change the article picture please.
Score: 12 Votes (Like | Disagree)

Johns12
Wow, so many people trash Walmart for try to get the lowest price for their products, yet it seems to be ok for Apple to try to undercut the market, by a large amount. Most artist are not in the financial league of Justin Bieber or Lady Gaga. This race to the bottom for compensation is not good for most artist, imo.
Score: 11 Votes (Like | Disagree)
Read All Comments

Sunday January 23, 2022 2:59 am PST by Tim Hardwick
Apple has always emphasized the depth of thought that goes into the design of its products. In the foreword to Designed by Apple in California, a photo book released by the company in 2016, Jony Ive explains how Apple strives "to define objects that appear effortless" and "so simple, coherent and inevitable that there could be no rational alternative." But every once in a while even Apple...
Read Full Article • 388 comments

Sunday January 23, 2022 10:32 am PST by Juli Clover
Apple is working on a number of new products that are set to launch this fall, and Bloomberg's Mark Gurman says that it will be "the widest array" of new devices that Apple has introduced in its history. In his latest "Power On" newsletter, Gurman explains that Apple is working on four new iPhones (5G iPhone SE, iPhone 14, iPhone 14 Pro, and iPhone 14 Pro Max), an updated low-end MacBook Pro,...
Read Full Article • 215 comments

Friday January 21, 2022 12:43 pm PST by Juli Clover
Earlier this week, Apple began requiring that customers taking advantage of educational discounts in the United States verify their status as a teacher, student, or school staff member through UNiDAYS. The requirement was a major change as Apple had never asked customers to go through a verification process in the United States before, and now, just three days after verification was added,...
Read Full Article • 224 comments