Thursday February 28, 2013 7:46 am PST by Ben Lovejoy
Apple has won the number one slot in Fortune's annual "World's Most Admired Companies" list for the sixth year in a row. 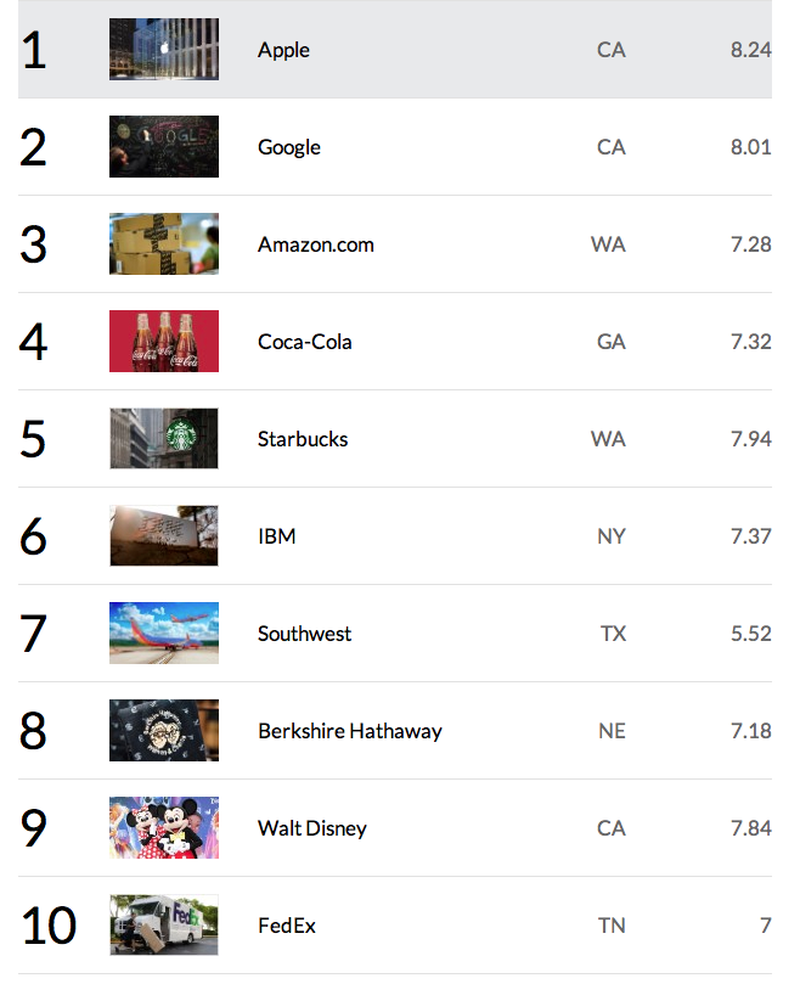 The ranking is based on a large-scale poll of corporate executives, directors, and industry analysts who were asked to rank companies by nine key attributes: Innovation, People management, Use of corporate assets, Social responsibility, Quality of management, Financial soundness, Long-term investment, Quality of products/services and Global competitiveness. Apple scored #1 in all nine categories.

Apple has had a rough time lately with its stock price in a free fall and the widely publicized failure of its Maps feature. However, it remains a financial juggernaut, posting $13 billion in net income last quarter, making it the most profitable company in the world during that period. The company has its fanatical customer base, and it still refuses to compete on price, making the iconic iPhone and iPad products that are still widely seen as prestige devices. Competition may be stiff, but so far it remains behind: In Q4 2012, the iPhone 5 was the world's best selling smartphone, followed in second place by the iPhone 4S.

The announcement is a bit of an embarrassment for Brad Chase, founding partner of Capitol Media Partners, who wrote a Forbes guest post earlier this week predicting that "bumbling" Apple would lose its number one slot and arguing that Fortune would have to "defy logic" to place Apple at the top once again. Confusion between Fortune and Forbes led to Chase's opinion piece being misreported by several media outlets earlier this week as Apple having actually lost its slot in a Forbes ranking.

cclloyd
You don't see Samsung on that list.
Rating: 21 Votes

google could take no 1 with the innovation they have come up lately.


Chromebook Pixel the $1000+ web browser, so innovative. :rolleyes: Google glass however is a different story but thats not released yet.
Rating: 8 Votes

And any list that puts Coca-Cola and Starbucks in the top 5 most 'admired' companies on the entire planet can't be taken that seriously.
Rating: 7 Votes

google could take no 1 with the innovation they have come up lately.


I don't know, as much as Google are able to come up with innovative products, those products (the physical ones) rarely ever affect our daily lives because they rarely are worth buying, or even possible to buy.

How many people do you know personally who own (or plan to own soon) a Chromebook Pixel? A Nexus Q? A Google TV? Google Fiber? How many plan to buy Google Glass at launch?

Now how many people do you know who use recent Apple products daily? Who buy new ones at launch?

drewyboy
egg in face much? Just goes to show these investors know **** about running a company... well other than into the ground.
Rating: 5 Votes

Yelmurc
I'd like to see this survey by region. How does Apple hold up outside the U.S. compared to inside the U.S?
Rating: 4 Votes

Disney just isn't one of the top places for people to choose for vacation spots anymore. It just doesn't hold the same flare as it use to years back.


I disagree. Being in the Top 10 at all still signifies that it's still got it. It might not have the same flare to you because you aren't a child anymore, but if you still watch kids there, it's freaking magical.
Rating: 4 Votes

basesloaded190
I thought Apple was doomed and done for?
Rating: 4 Votes

That list has Soutwest Airlines, an American airline that, correct me if I'm wrong, only flies in the US. Most of the World has no clue what that company does, and definitely has not interacted with the brand at all.

It's an entirely American-centric ranking.

This is like the World Series in baseball...
Rating: 3 Votes

In this context, Admired = "brand recognition" or "Marketed"


Try reading the article. This is not a survey of the public...

"The ranking is based on*a large-scale poll of corporate executives, directors, and industry analysts who were asked to rank companies by*nine key attributes:"

So your comment about brand recognition and marketing show your troll to be a fail. This is a survey of professionals and what they think about other companies, their peers and competitors.
Rating: 3 Votes