iOS 6.1.2 is already used on more iOS devices in the U.S. and Canada than any other version of the operating system, with adoption rates hitting 35% in just six days, according to data from ad network Chitika. 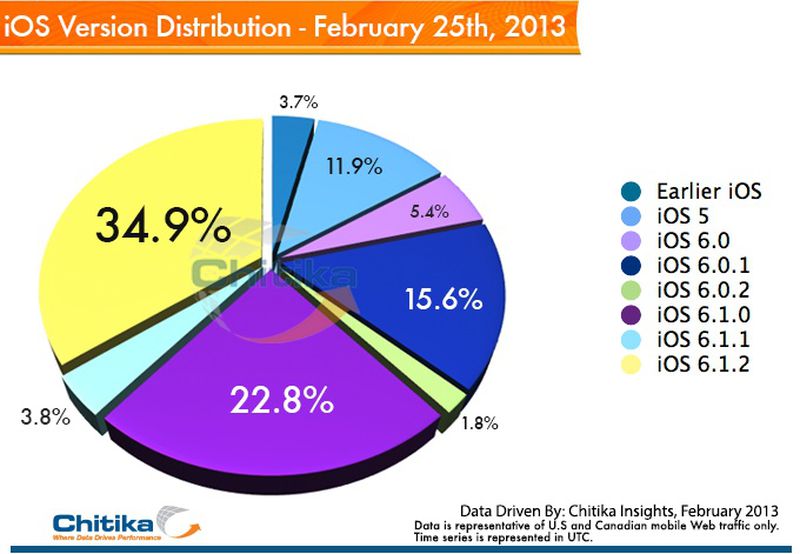 As this latest update fixed a battery life issue ― a major phone feature ― it’s understandable that the rate of adoption for iOS 6.1.2 would reach these levels so quickly. For comparison, 48 hours following its release, iOS 6.1.2 adoption nearly equaled what we observed for the much more highly anticipated iOS 6 within the same time period ― a significant achievement considering this update was centered on an OS bug fix.

iOS 6.1.2 represents the second emergency bug fix rushed out by Apple since the release of iOS 6.1, with iOS 6.1.2's Exchange calendar bug fix following an iOS 6.1.1 release specifically for the iPhone 4S to address an issue with 3G performance.

Dwalls90
6.1.3 will have no adoption because it patches the jailbreak ...
Rating: 4 Votes

Sky Blue
People don't want to be cut off from Exchange :)
Rating: 3 Votes

Very poor choice of colors for the pie chart.


I couldn't agree more. Reading the chart was like looking at hieroglyphics.
Rating: 2 Votes

That, and the fact that 6.1.2 is the last version of iOS that doesn't fix the envasi0n jailbreak.

I do wonder whether not fixing the jailbreak in iOS 6.1.2 was deliberate on Apple's part? It's been pointed out that Apple's turnaround time in patching has been faster on some previous jailbreaks. In this case perhaps they felt it was better to give jailbreakers one more compatible update rather than having millions of iOS users with potential battery life issues and clogging up corporate Exchange networks because they are reluctant to update and break their jailbreak.
Rating: 1 Votes

People don't want to be cut off from Exchange :)


That, and the fact that 6.1.2 is the last version of iOS that doesn't fix the envasi0n jailbreak.
Rating: 1 Votes

MisterKeeks
All the rest are Jailbreaking.
Rating: 1 Votes
[ Read All Comments ]