LEGO The Lord of the Rings Hits the Mac App Store

LEGO The Lord of the Rings, which was released for consoles and PCs late last year, has finally made its way to the Mac.

The game, which is based on The Lord of the Rings film trilogy, incorporates events from all three of the movies. It features actual film dialogue along with RPG elements that are not present in other LEGO games, such as an expanding inventory and open world exploration. 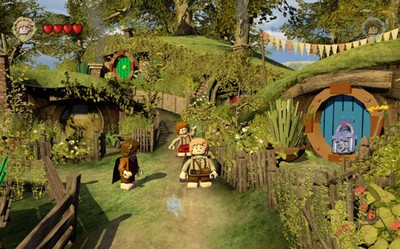 From the peaceful fields of the Shire to the mysterious beauty of Rivendell and on to the fearsome depths of Mordor, forge your own path through a vast open world.
Set out on perilous side quests, discover secret areas and solve challenging puzzles alongside the epic main adventure.

Master the special powers of over 80 playable characters, including Frodo's ability to wear the One Ring and enter the shadowy world of the Ringwraiths…

Hunt for hidden treasure! Collect, craft and use magical items including Wizard staffs, Mithril armour and Elven blades that glow blue in the presence of Orcs.

LEGO The Lord of the Rings can be played in single player mode or with multiple two players. It requires Mac OS X 10.7.5 or later, a 1.4GHz processor, 4GB RAM and 128MB VRAM.


LEGO The Lord of the Rings can be downloaded from the Mac App Store for $29.99. [Direct Link]
34 comments

charlieegan3
Every new thing i see from lego it seems to be more and more lacking in actual lego bricks.
Score: 12 Votes (Like | Disagree)

$30??!!! are they Nuts! I hope this isn't a sign of things to come.
No wonder people pirate games. $30 for a ported Lego game is unbelievable.

$30??!!! are they Nuts! I hope this isn't a sign of things to come.
No wonder people pirate games. $30 for a ported Lego game is unbelievable.


What the hell is wrong with $30 for a proper 3D game? Everyone's obsessed with iOS app pricing these days.
Score: 5 Votes (Like | Disagree)

Are these LEGO games actually any good?

Yes, I've played quite a few of them, there isn't one I haven't enjoyed yet. This LOTR one is frequently hilarious if you love the films on which it's based, it's good to see it on the mac (though I won't be buying unless it gets cheaper, because I have the PS3 version already). Obviously if you hate LOTR and/or Lego there's not a lot of point playing it though.
Score: 4 Votes (Like | Disagree)

Are these LEGO games actually any good?

Some of the recent ones have had good reviews; but I've always been skeptical.


My kids (7 and almost 9) absolutely LOVE LEGO Harry Potter. I will confess to enjoying it very much also.

They're not aimed at hardcore gamers -- which is actually a big reason I enjoy them: they're fun without being stressful. (I am terrible at "hardcore" games.)
Score: 1 Votes (Like | Disagree)

Also, graphics performance is still sadly lacking on the Mac compared to the exact same game on Windows.


Don't get me started on Microsoft and directX! :P

But at least Valve will get OpenGL a better standing by using Linux as their front runner in the near future.
Score: 1 Votes (Like | Disagree)
Read All Comments

Tuesday April 13, 2021 9:04 am PDT by Juli Clover
Following an overnight leak by Siri, Apple today officially announced that it will be holding a special "Spring Loaded" event on Tuesday, April 20 at 10:00 a.m. Pacific Time at the Steve Jobs Theater on the Apple Park campus in Cupertino, California. As with all of Apple's 2020 events, the April 2021 event will be a digital-only gathering with no members of the media invited to attend in...
Read Full Article • 271 comments

Monday April 12, 2021 3:50 am PDT by Sami Fathi
In a report outlining a possible Apple TV with a combined HomePod and camera, Bloomberg's Mark Gurman says that Apple is exploring a future high-end HomePod speaker that could include an iPad connected via a robotic arm that tracks and follows users around a room. From the report: The Cupertino, California-based technology giant, is also mulling the launch of a high-end speaker with a touch ...
Read Full Article • 110 comments