Wednesday February 13, 2013 5:49 am PST by Eric Slivka
Apple today announced that it has updated its Retina MacBook Pro lineup with new processors, also moving to lower pricing across the board on the 13-inch models. 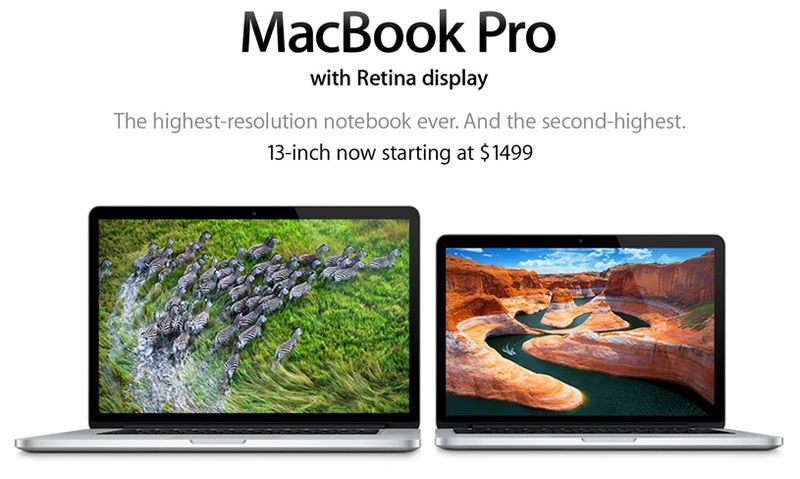 The high-end 15-inch stock configuration now has the twice the amount of RAM that it had previously and the new 13-inch Retina MacBook Pro prices are $200 and $300 cheaper than their predecessor models, respectively. Apple has also lowered pricing on SSD upgrades across the Retina MacBook Pro lineup, with the bump from 256 GB to 512 GB now costing $300 instead of $500 and the additional bump to 768 GB costing $400 instead of $500.

Update: Apple has also eliminated the high-end stock configuration of the non-Retina 15-inch MacBook Pro, leaving only the base model starting at $1799. Customers can still configure the low-end model with all available options, meaning that the previous high-end configuration is still available, but it is no longer being promoted separately as a stock machine.

JaySoul
So nobody was buying them...
Rating: 60 Votes

So nobody was buying them...


Hah. Walk around a college campus, ANY college campus and see how long you can hold onto that thought. Nice try though.
Rating: 49 Votes


All the college kids have Retina MacBook Pros?
Rating: 34 Votes

kobyh15
They had to do this. The rMBPs are way too expensive, especially the 13". I'm waiting for Haswell though. I didn't think they'd drop the price until the Haswell refresh.
Rating: 21 Votes

azentropy
Nice, more in line with what it should be. However still waiting on the 13" rMBP to go quad-core, have discrete gpu and a 16gb option.
Rating: 15 Votes

So nobody was buying them...


Actually if you look at Apple price history you will notice that they systematically lower prices of products that use new, expensive technology (like retina display) 6-8 months after release due to optimization in production. It's always happened and it will no doubt happen again with the new iMac in summer/autumn.
Rating: 14 Votes

ChadwickS
Of course, everyone on Twitter who has bought a MacBook now complains:

F###### S###!!! Apple just spec bumped their Retina Macbook Pro line. Look like I'll be returning the one I bought about a week ago. - Edwin Torres (@iEdwinT)

A week ago? Ok, that's some frustration there.

How does Apple dare to update its Macbook Pros a few weeks after I bought mine? - Ronen Mendezitsky (@ronenmendez)


Two weeks ago? Alright, I can buy that.

Of course, because I bought a MacBook Air less than a month ago! - Sean Brodrick (@SeanBrodrick)


A month? My sympathy-meter is seriously starting to wane here.

Apple just cut the price on the MacBook Pro with Retina Display... bought one in Aug- can I get the difference, Steve? - Rocco Pendola (@Rocco_TheStreet)


August! I don't know what the statute of limitations are for Apple anger at new products, but I think you've broken it.