Kanex’s DualRole is an Ethernet hub that comes equipped with three USB 3.0 ports, a useful accessory for newer MacBooks which require an adapter to connect to a wired network. 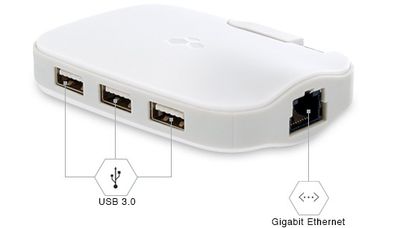 The DualRole is USB bus powered with an included 3-inch cable, but it also supports an additional 5V power adapter (not included) to provide extra power for intensive tasks like charging the iPad and the iPhone or powering hard drives.

While DualRole supports plug and play for its USB 3.0 ports, it does require drivers to access the Gigabit Ethernet port.

Kanex’s DualRole is available immediately for $69 from the Kanex website.

Why would you need it to be a Thunderbolt port? USB 3 is far cheaper to implement and faster than both Gigabit ethernet and all but the highest-end external RAID enclosures.

Because with a thunderbolt port you could operate all three of those USB3 ports and at full 5Gbit speeds and the gigabit ethernet port. You can't do 3x USB3 speeds on a USB3 port.
Score: 6 Votes (Like | Disagree)

Great now make that a Thunderbolt port and they will finally have something!


And then watch it quintuple in price...
Score: 2 Votes (Like | Disagree)

nutmac
Only 3 USB 3.0 ports? Since the hub will use one of the USB ports on the Mac, it is only adding 2 USB ports and gigabit ethernet (which requires awkward 3rd party driver and I am probably better off using Apple's $29 Thunderbolt-to-Gigabit adapter).
Score: 2 Votes (Like | Disagree)

WhoDaKat
Great now make that a Thunderbolt port and they will finally have something!
Score: 2 Votes (Like | Disagree)


Compared to the proposed (yet seemingly non-existent) Thunderbolt hubs, it's darn cheap. Figure in the cost of an Apple Ethernet adapter for a Macbook Pro Retina and I don't think it's really that bad if you have a need for both more USB 3.0 ports and an Ethernet port (like many Macbook Pro Retina users do). Sadly, you only gain 2 ports here and that's a real problem. I simply don't get why hub makers (and even Apple on their notebooks even) offer so few ports. One external mouse and keyboard (wired) and you're DONE on a MBP Retina. It's ridiculous. My 2008 MBP has SO many more ports in total AND an upgrade slot to boot. The Retina model wastes space on the side where more ports could be added with a better design. Personally, under those conditions I'd rather have just a Mini-Display Port instead of Thunderbolt and have 4-6 USB 3.0 ports instead (utilizing all that internal space that the TB chip takes up if needed to create space near the edges of the motherboard for more ports).

What I need (for my Mac Mini which has 4-ports already) is a reliable 7-port USB3 hub and thus far the best reports for compatibility I've been able to find are 4-port hubs which would only give me 3 extra ports in total. I've already got a 7-port USB 2.0 hub MAXED OUT here (which uses one USB 3.0 port to connect) and I only have one USB 3.0 port still open as a result for any USB drives, etc. and have two more USB 3.0 3TB backup drives to connect during backups. So one more permanent type device and I have no more ports without unplugging something.

My Mac Mini doesn't need a second Gigabit port so this product doesn't interest me regardless of the number of USB 3.0 ports (i.e. no point paying for something you're not going to use unless it's the only product available), but I can see why a MBP Retina user would be interested.
Score: 1 Votes (Like | Disagree)
Read All Comments