Apple has quietly added a new notes feature to its curated apps in the iOS App Store. Apps chosen for Editor's Choice and App of the Week now come with App Store Notes, which offer a quick description of the app. For example, here’s the new note feature for Might & Magic: Clash of Heroes:

Clash of Heroes has it all: epic storytelling, a wonderful blend of style and substance, and a spectacular battle system. This strategy-puzzler is genre-defining and an absolute must-play effort from the creators of Sword & Sworcery EP.

The App of the Week, Gesundheit, which is currently offered for free in the iPhone App Store, features a similar description. Some other apps, such as those found in the "New and Noteworthy" and "What's Hot" sections of the App Store also have App Store Notes, though not all of the apps in those sections have the new notes. 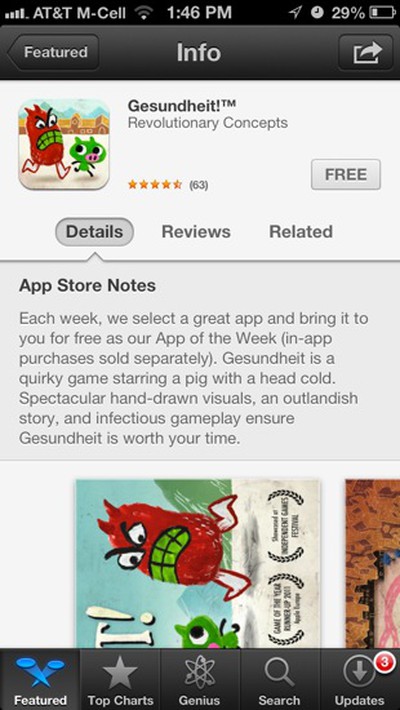 Six of 24 New and Noteworthy apps on the iPhone have notes, while the rest do not. Only two apps, Temple Run 2 and Momonga Pinball, on the What's Hot have notes included.

App Store Notes might be trickling out to all of Apple's selected apps, or may be reserved for those that are the most popular. At this point in time, it is unclear what criteria Apple is using to determine which apps are furnished with notes, or if it is a feature that will roll out to all curated apps. The new app notes are only visible in the iOS App Store, and do not show up in the desktop version of iTunes.

Update: App Store Notes first appeared back in December, for the apps that Apple selected as the best of the year. The feature now appears to be rolling out more broadly to other curated App Store sections.

turtlez
@ all the whiners here:

So Apple does something harmless and you cry

Apple does nothing and you cry

You guys are the ones that keep the world from going forward.

iTunes Store and Mac App Store are theeeee worst tools for discovery ever made.

Bubba Satori
Glad this came out before the new Mac Pro.
Score: 9 Votes (Like | Disagree)

Glad this came out before the new Mac Pro.

Didn't you see what happened to Apple's stock price lately? Apple is low on market cap, they had no choice but to take one of their few hardware engineers off the new Mac Pro and start teaching him how to code html so he could create this little feature in the App Store. I'm sure he'll get back to work on the Mac Pro soon though, right after he's finished his Genius bar shift.

The notes are cool...but I wouldn't exactly call the feature, "innovative."

What does this have to do with the Mac Pro? This is about iOS apps.

turtlez
This forum has just turned into a big whining fest. I don't see how a tech company can make your lives so miserable that you are compelled to cry about every article macrumors puts up about Apple, good or bad. Go out and enjoy life, you only have one shot at it..
Score: 5 Votes (Like | Disagree)
Read All Comments

Friday July 23, 2021 9:37 am PDT by Juli Clover
Apple is developing an external display that includes an A13 chip with Neural Engine, according to a new rumor from 9to5Mac. The A13 chip with Neural Engine would presumably serve as an eGPU, though details are light at this time. Having a CPU/GPU built into the external display could help Macs deliver high-resolution graphics without using all the resources of the computer's internal chip....
Read Full Article • 201 comments

Friday July 23, 2021 8:23 am PDT by Mitchel Broussard
Apple's MacBook Pro and MacBook Air lineup is seeing all-time low discounts across the board today, including the 2019 16-inch MacBook Pro, 2020 13-inch MacBook Air, and 2020 13-inch MacBook Pro. Note: MacRumors is an affiliate partner with some of these vendors. When you click a link and make a purchase, we may receive a small payment, which helps us keep the site running. 13-Inch M1...
Read Full Article • 12 comments