AT&T Activates 8.6 Million iPhones in Q4 2012, Device Accounts for Some 84% of Smartphone Sales

AT&T has released its holiday quarter earnings data, reporting that it sold a record 10.2 million smartphones -- 8.6 million of those (84%) being iPhones. AT&T reported earlier this month that the quarter was its best ever for iPhone sales. 16% of the iPhones were on accounts new to the company.

During the same holiday quarter, Verizon activated 6.2 million iPhones, some two-thirds of its total smartphone sale. AT&T's previous best quarter was 2011's fourth quarter, when it activated a total of 9.4 million smartphones and 7.6 million iPhones -- an 80% share for the Apple device.

On Twitter, Apple watcher Sammy the Walrus calculated that 74% of smartphones sold by AT&T and Verizon were iPhones, giving the device an "iPod-like share".

Update: AT&T has reached out to us to note that the 8.6 million iPhone number is activations, while the 10.2 million smartphone sales number is sales. This means the iPhone probably doesn't make up exactly 84% of smartphone sales, but it should be in the right ballpark. The activations number includes hand-me-down iPhones and the like.

unlimitedx
Yet analysts think even more should have been sold
Score: 12 Votes (Like | Disagree)

And so many of those were iPhone 4s. It's remarkable.

The people have spoken, we need a larger form factor as well.

That's a lot of iPhones. And people still think Apple is doomed. 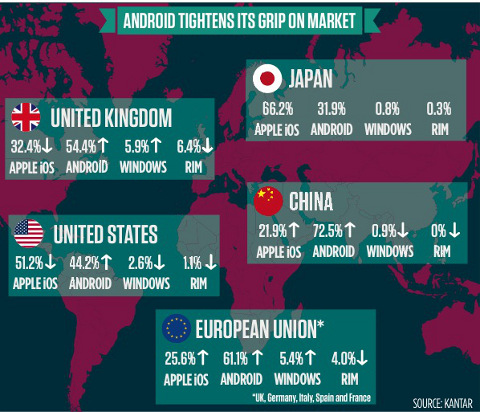 And in other news...

You clearly state in the "Update" to the article that AT&T gave you additional information to say that your 84% number was incorrect, yet you did not correct your article nor the headline? By aggregating info from the update and the article the iPhones did not account for 84% of sales of smartphones for AT&T in the fourth quarter of 2012, nor is their enough data to account for percentage of activations.

You are mixing numbers from two places that don't belong together to come up with an improperly labeled (at least) statistic. There were 10.2 million sales of smartphones by AT&T, you did not reference information about how many of those sales were iPhones. Sure, there were 8.6 million iPhones activated in Q4 2012, but how many other smartphones were activated in the quarter? You even reference "The activations number includes hand-me-down iPhones and the like," so how can you possibly draw the conclusion that 8.6 million activations against 10.2 million in sales equals 84% sales of iPhones? That math doesn't work. You don't have the data points necessary to do an accurate-let alone precise-calculation.

Unless this website is owned by Rupert Murdoch, you're committing a heinous breach of journalistic ethics. Please correct or remove your article as it is a disgraceful piece of communication.