Later this year, Other World Computing plans to release a 3.5" SSD drive meant for tower-style PCs like the Mac Pro. The drive, called the "Mercury Viper", will allow OWC to build an SSD with capacities as large as 2TB, as well as transfer rates over 600MB/s over a SATA 3 connection. 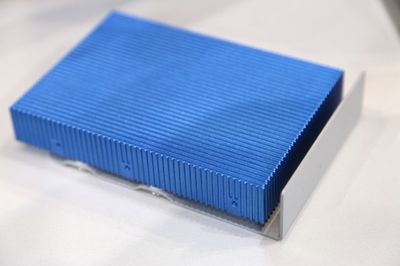 Currently, OWC makes 2.5" SSD's that can be installed in a laptop or desktop via a bracket, but the extra space in a 3.5" drive allow for four times the capacity as their current drives -- at a significant cost. A OWC spokesperson told Ars Technica that the drive was designed "performance and capacity, not price".

That's in stark contrast to where the rest of the market is headed, typically driving costs down and making the most of 2.5" and mSATA form factors used in notebooks and Ultrabooks. But workstation may care less about budget and more about getting work done. "We think the price will be right for the kind of user that spends $6,000 on a computer," Dahlke said. "And you can't get this kind of capacity anywhere else."

Pricing and availability details are expected in March.

djepsilon
Now if only there was a new MacPro to put said drive into!
Score: 15 Votes (Like | Disagree)

true, doesn't mean I have to like it though, does it?

If you're that one person in the world who uses a workstation with his head stuck in the enclosure instead of looking at the screen, yes

That is my normal working position. ;-)
Score: 6 Votes (Like | Disagree)

nsayer
Towards a new storage architecture

I've currently got a 5Big Network 2 configured for RAID 6. I did this because I wanted to not have to worry about individual or even two drive failures.

But the idea of large SSD modules seems wrong-headed to me.

Building large capacity rotating drives makes sense because a rather large fraction of the cost of the device is the storage infrastructure rather than the storage medium itself.

Flash storage turns that on its head. The vast majority of the cost is the storage medium itself.

What I want to see is a NAS that looks a bit like the inside of HAL-9000 - a large number of relatively small flash modules, each easily field-replaceable.

In order to make this a reality, what I think is necessary is a new, cheap, simple interface standard for flash memory modules. Groups of these modules could be grouped together behind a single SATA controller for an eSATA flash "JBOD" style enclosure, or a larger number of them could be RAIDed for a NAS.
Score: 4 Votes (Like | Disagree)
Read All Comments