MacRumors has received word from several Apple reseller partners that they have already begun receiving shipments of Wi-Fi iPad mini and fourth-generation iPad models ahead of their launch scheduled for this Friday, November 2. 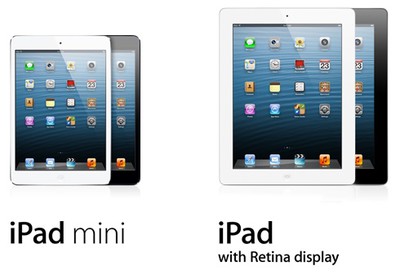 A second reseller is reporting a somewhat contrasting scenario, noting that it has received roughly 25 iPad minis and about 80 fourth-generation iPads so far. This reseller is, however, reporting that it expects to receive additional shipments throughout the week leading up to Friday's launch.

As we noted earlier today, all launch day pre-orders of Wi-Fi iPad mini and iPad models have now sold out, and many of those who were able to place orders for delivery on Friday are tracking their shipments that left China earlier this week en route to their destinations.

I would be surprised if the Mini doesn't get an update next spring.


i would be surprised if any ipad gets an update next spring
Score: 5 Votes (Like | Disagree)

If you have an iPad 2, just imagine it's smaller! Other than the physical size, it's the same hardware as an iPad 2 as far as the software is concerned.

Which is good news for current iPad 2 owners, as their iPad just got at least another year of being a current version of iPad that developers must target.
Score: 5 Votes (Like | Disagree)

I would be surprised if the Mini doesn't get an update next spring.


If it gets an update in the spring then I will buy one then too and just sell my 1st generation online for a little loss. I know I am an early adopter and that is the price you pay I guess.
Score: 4 Votes (Like | Disagree)

campingsk8er
I'm not complaining at all. But I'm getting the iPad w/ Retina Display now. As soon as they announce/release the next generation iPad mini w/ Retina Display and A6X or whatever it will have, then I will buy the mini :D
Score: 2 Votes (Like | Disagree)

I haven't seen much excitement about the new iPad, but the iPad mini is generating a lot of interest among my friends.

Glad to see they will be stocked at locations other than just Apple stores.
Score: 2 Votes (Like | Disagree)

I totally agree with you, specs mean nothing If the software isn't optimized.. But keep in mind it comes with Android Jellybean, so the performance is very comparable to iOS..

You can't really make the ecosystem argument anymore, Android has a very large ecoystem, I think most people can easily get by with the Android Market..

And anyway, while the Nexus 10 will be lacking in areas, the $399 price tag makes up for it, especially when you consider the 300PPI display..

The deal maker for me is Apple ties their phones, tablets, laptops and desktops seamlessly together. What group of android devices can do this?
Score: 1 Votes (Like | Disagree)
Read All Comments