ifoAppleStore posts a photo of Apple's concept for a redesigned Genius Bar for at least some of its retail stores, a move intended to increase capacity at the busy support location. Significantly, the change turns the entire Genius Bar by 90 degrees to provide stools for customers on both sides of the table. 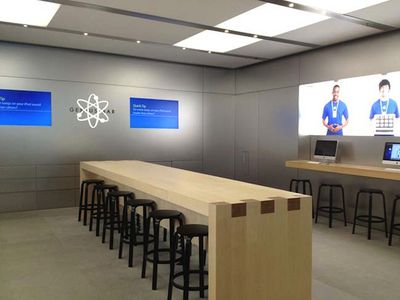 The change also breaks down the barrier between customers and support staff, with Geniuses and customers apparently mingling on the same side of the table. As Apple has tweaked its support procedures so that Geniuses are assisting up to three customers at a time, the company can also more efficiently address customer needs with the new layout. In the example described by ifoAppleStore, the move allows the total number of stools to be increased from 7 to 12, although some of the newly-gained space will still be needed by Geniuses for their work with customers.

This new 90-degree Genius Bar turn solution would be particularly effective at narrow stores where there is limited room for seated customers. The improvement seems to come at the expense of the very popular kids area, with its round, black seats and iPads loaded with children’s software. It’s not clear if this design change will be rolled out to other stores or if it’s simply being tested at this specific store.

As the report notes, the move would sacrifice the kids' tables typically found near the rear of Apple's narrow store designs, certainly a disadvantage for some customers. Apple earlier this year replaced the iMacs at its kids' tables with new iPads, increasing the number of devices available for use and moving to a more natural touch-based exploration concept.

As Apple has tweaked its support procedures so that Geniuses are assisting up to three customers at a time,


except where systems are being restored from backup etc I don't see this as a good thing. Help 1 person to conclusion and then move onto the next.
I would be rather annoying if someone came over to help and then went off to carry on with another appointment.
Score: 27 Votes (Like | Disagree)

iVoid
Considering I had to make a Genius Bar appointment to do a simple exchange for a defective iphone ear bud set, they would be better off letting some of the lower level blue shirts do simple exchanges to free up time and space for the 'Geniuses'.
Score: 12 Votes (Like | Disagree)

Idioteque_
Telling someone they need to perform a hard reset is better at a 90 degree shift.
Score: 12 Votes (Like | Disagree)

Honestly, all of this strikes me as Apple trying mightily to avoid the *real* solution to their problems; leasing out larger areas for their stores.

When the Apple stores first opened where I live, I was honestly shocked to see how small they were. I mean, our "primary" store is about the size I would think they would have kept their "secondary" store ... and the smaller of the two? Well, I believe they've already moved it once to a larger space, but it's still not big enough.

I mean, it's not like Apple has to be concerned about a lack of foot traffic or sufficient sales to justify their monthly rent. (This probably WAS a concern, back when Apple first got into retail and everyone said they were doomed to failure....)

If they've reached a point where they've got to change the Genius bar from a real bar metaphor (with the "bartender" on one side and customers on the other) AND eliminating a kids' area, just to accommodate everyone? It's time for a larger store!

I knew this would happen sooner or later. Was just in the Brea Apple Store and the kid's table had been moved to the back near the back door. Employees kept telling the kids to move because they were in the way. My wife said, "Aren't they interested in the next generation?" I guess, not at the expense of paying customers. If they think adding a few seats to the Genius Bar will make a big difference, they are just kidding themselves.

juannacho
I suppose with better use of space they can fit in more tiny horses... 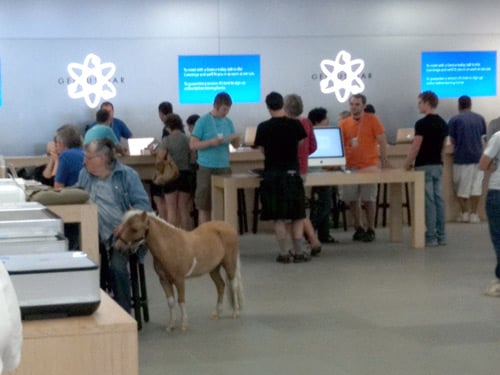 Thursday September 29, 2022 12:38 pm PDT by Juli Clover
Tony Blevins, Apple's vice president of procurement, is set to depart the company after he made a crude comment about his profession in a recent TikTok video, reports Bloomberg. Blevins was in a video by TikTok creator Daniel Mac, who was doing a series on the jobs of people he spotted with expensive cars. After seeing Blevins in an expensive Mercedes-Benz SLR McLaren, Mac asked Blevins what ...
Read Full Article • 672 comments

Thursday September 29, 2022 1:08 pm PDT by Juli Clover
The third beta of iOS 16.1 that was released earlier this week expands the Adaptive Transparency feature introduced with the second-generation AirPods Pro to the original AirPods Pro. As noted on Reddit, first-generation AirPods Pro owners who also have the AirPods beta software will now see an "Adaptive Transparency" toggle in the AirPods section of the Settings app. The 5A304A beta...
Read Full Article • 114 comments