A Closer Look at the New MacBook Pro's Retina Display

AnandTech takes a closer look at the new MacBook Pro's 2880x1800 Retina display, revealing just how well the display stacks up against its predecessor and other notebook displays and delving into the details of how it handles various resolutions.

In looking at scaling, the report explains the new slider option in System Preferences that allows users to select from a spectrum of resolutions that include not only the 1440x900 resolution in Retina quality using the full 2880x1800 pixels, but also larger desktop spaces at 1920x1200 and 1680x1050.

Retina Display MBP owners now get a slider under OS X's Display Preferences that allow you to specify desktop resolutions other than 1440 x 900. At 1440 x 900 you don't get any increase in usable desktop resolution compared to a standard 15-inch MacBook Pro, but everything is ridiculously crisp. If you're like me however and opted for the 1680 x 1050 "high-res" upgrade last generation, this won't do. Thankfully Apple offers 1680 x 1050 and 1920 x 1200 scaling options that trade a bit of image quality and performance for added real estate. 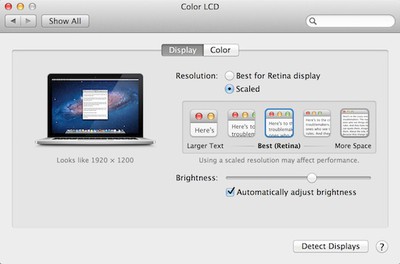 AnandTech's report also describes how Apple's display design has done away with the cover glass that in some circumstances suffers from significant glare on the standard non-Retina MacBook Pro. Phil Schiller noted during the keynote introduction that glare has been reduced 75% from the previous MacBook Pro, and AnandTech calls the Retina MacBook Pro's glare "remarkably close" to that seen on an earlier-generation matte MacBook Pro.

As with Retina displays on iOS devices, Apple automatically scales text to display at the crisper Retina resolution, but it is dependent on apps using Apple's text rendering. AnandTech notes that Google Chrome currently uses its own text rendering engine and is thus unable to take advantage of the sharper text available in Safari.

Finally, the report takes a look at how games handle the Retina display, with Diablo III taking full advantage of the 2880x1800 display as touted by Apple during the keynote. Some games are able to see the full resolution while others are limited to the "non-Retina" resolutions topping out at 1920x1200, but it seems reasonable to believe that over time game developers will be building in support for the ultra-high resolution of the new MacBook Pro.

BrightonMB
The 75% reduction in glare is the most interest to me - hoping they might take this into the next iMac refresh to make it more viable for pros perhaps?
Score: 27 Votes (Like | Disagree)

Sure we can use Photoshop or Gimp to downscale it, but then we have Photoshop or Gimp's downscaling algorithm coming into play. What we need to know and see is a 2880x1800 shot of the 3360x2100 shot downscaled using the same code OS X uses.

That's why I say Anand's comparison is bunk, it's not possible to see what it actually looks like on the screen.

I'll wait to see it in store. Feel free to downrank me for not "believing" blindly.
Score: 16 Votes (Like | Disagree)

If you were to select a resolution that wasn't exactly the native pixel density (2880x1800) or exactly half (1440x900), and were to instead pick a larger resolution like 1680x1050 or 1920x1200 (as mentioned in the article) wouldn't you experience fuzzing as the software tries to compensate for the hardware vs. software pixel boundaries?

When you pick the "more space" option, which is equivalent to 1920x1200, OSX actually renders it at double that size in both directions, or 3840x2400, using the retina quality graphics. It then smoothly downscales to 2880x1800.

It probably isn't perfect, I haven't seen one in person yet, but it should be much better than simply setting a display to a non-native resolution.

Instead of upscaling a low resolution image, it's downlscaling a high resolution one.
Score: 12 Votes (Like | Disagree)

Littleodie914
If you were to select a resolution that wasn't exactly the native pixel density (2880x1800) or exactly half (1440x900), and were to instead pick a larger resolution like 1680x1050 or 1920x1200 (as mentioned in the article) wouldn't you experience fuzzing as the software tries to compensate for the hardware vs. software pixel boundaries?
Score: 9 Votes (Like | Disagree)

Yes. Also not much point paying for an expensive 2880 screen and running it at 1680 when a native 1680 screen would be both sharper and cheaper, if they offered it.

Anandtech specifically says that the '1680x1050' mode on the Retina Macbook Pro looks better than the old 1680x1050 display:

Even at the non-integer scaled 1680 x 1050 setting, the Retina Display looks a lot better than last year's high-res panel. It looks like Apple actually renders the screen at twice the selected resolution before scaling it to fit the 2880 x 1800 panel (in other words, at 1920 x 1200 Apple is rendering everything at 3840 x 2400 (!) before scaling - this is likely where the perf impact is seen, but I'm trying to find a way to quantify that now). Everything just looks better. I also appreciate how quick it is to switch between resolutions on OS X. When I'm doing a lot of work I prefer the 1920 x 1200 setting, but if I'm in content consumption mode I find myself happier at 1440 x 900 or 1680 x 1050.

The scaling that Apple is doing is very different than just running a display at a non-native resolution.
Score: 8 Votes (Like | Disagree)
Read All Comments