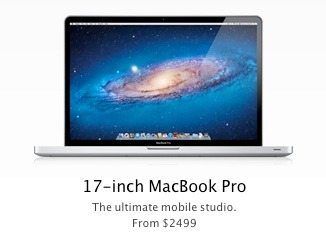 Apple appears to have quietly discontinued the 17" MacBook Pro today amid the flurry of updates and announcements at WWDC today. Apple's newly updated MacBook Pro product page mentions the new Retina Display-equipped 15" Pro, as well as the new 13" and 15" Pro's, but is silent on the 17".

The 17" PowerBook G4 was first released in January of 2003 and has received a number of updates over the years, including transitions to the Intel-equipped 17" MacBook Pro and receiving an update to the current unibody construction as well. Research analyst Ming-Chi Kuo said in April that the 17" MacBook Pro would soon be discontinued due to weak sales.

Eriden
Totally makes sense from a sales perspective, but sucks for the pros who used the 17" MBP as a primary workhorse.
Rating: 32 Votes

Enigmafan420
I disagree with most of you saying too big or too expensive or whatever.

I LOVE MINE. The matte screen option makes it a portable media center. Yeah-it's heavy. But not more so than many Windows machines.

And when I am traveling and want to watch a movie in the hotel, it almost always provides better picture and lower cost (DVDs brought with or Netflix streaming) than any pay per view at the hotel.

But the 17" provides vital screen real estate for video and audio editing away from your normal desk locations. I don't want to carry a second monitor around for that.

At least the new powerful MBPs can handle an external monitor if I go that way...
Rating: 25 Votes

D216
Apple, you really need to show the PRO some love and give it an update!!!
Rating: 15 Votes

For on the go, the 17" was just too big. On the desktop, plug in an external display and kick butt. I think that's the key here. This has more resolution than most external displays and thus on the go isn't lack luster at all.


I usually carry TWO 17" MacBookPros and a bag full of adapters, two external hard drives and a bunch of other stuff in a rolling computer bag. I heave that thing into the overhead bin on the airplane and I'm a 47 year old woman. I'm going to miss having that real estate to create/edit/present motion graphics but I'll go to the Apple store and see how tiny pallets need to get for me to use After Effects and Motion on a 15" retina display.
Rating: 15 Votes

Nuvi
Retina display is nothing more then ultimate eye candy. The effective workspace is only 1440x900. What you get is crisp GUI elements but that's it. If you work with audio or video you won't be seeing any more audio or video tracks that you did with the old plain vanilla 15" MBP. Seriously, those who are used to working with 17" on road will be seriously missing that workspace. Working with 15" is total PITA at least for many video and audio guys.

If you can use Retina MBP without pixel doubling then you will just get tiny GUI elements without the Retina eye candy effect. Not really a solution I want to be working with.

Edit: For those guys who have difficulty crasping the concept of pixel doubling and how it effects the actual workspace I suggest you compare the iPad 2 (or 1) and the new iPad (gen three). Has the workspace changed so that you can see more on the new iPad? No it hasn't. Exactly the same applies to retina MBP. You will only get crisp GUI elements and nothing more.
Rating: 14 Votes

Not surprising. And I don't think too many people will miss it now with the new 15" Retina MBP.


You must all have microscopes for eyes or something. 15" monitors reminds me of the days of the C64 and early Amiga. They're TINY (vertical space is even less than the days of old since that's 15" in widescreen, not 4:3). What good is all that resolution if you have to stick your nose to the freaking display to see it??? The value of a 17" MBP is that the screen is large enough to work with yet it's still portable. I'd imagine they were invaluable to certain professionals. But I guess Apple has decided they don't want to be a professional computer company anymore. They want to be TOY, GADGET, and PHONE company instead.

Ethernet, Optical, Firewire...all gone. Two Thunderbolt ports that virtually NO ONE supports (and what little there is costs a fortune, but then so does the new MBP; it's at nearly base Mac Pro prices!) I'm shocked they'd include an HDMI port (thought that was a HUGE NO-NO for Apple except on AppleTV). That's about the only positive thing I can say. Two lousy USB ports. You're going to have to carry an entire BAG of accessories for this thing.

It just doesn't make logical sense. You leave out everything but the kitchen sink to make it smaller and thinner, but then you HAVE to carry an entire bag of dongles and hubs around to use current gear which defeats the entire point of making it more portable! I think these people at Apple have a few screws missing in addition to USB and Ethernet ports. :rolleyes:
Rating: 14 Votes
[ Read All Comments ]