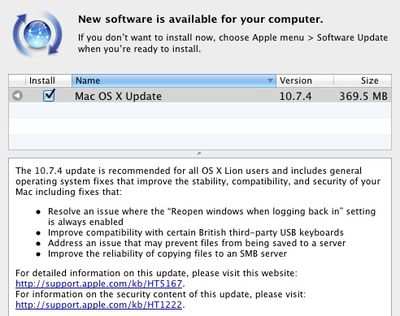 The 10.7.4 update is recommended for all OS X Lion users and includes general operating system fixes that improve the stability, compatibility, and security of your Mac including fixes that:

Detailed information is available in the full release notes. Notably, the update also includes a fix for the password security hole detailed earlier this week.

An issue existed in the handling of network account logins. The login process recorded sensitive information in the system log, where other users of the system could read it. The sensitive information may persist in saved logs after installation of this update. See http://support.apple.com/kb/TS4272 for more information about how to securely remove any remaining records. This issue only affects systems running OS X Lion v10.7.3 with users of Legacy File Vault and/or networked home directories.

This patch improved my computer performance by 17%!


It was probably the reboot that did it. :D
Score: 18 Votes (Like | Disagree)

That first fix has been a long time coming!


Second. I HATE that "feature". I hate it on the iPhone too. When I restart I want a fresh start.
Score: 17 Votes (Like | Disagree)

s2dio
I'm "super excited and really thrilled" about this update. Such killer features as unchecking a box to open all apps on login are the ones that make me go to work every day.
Score: 16 Votes (Like | Disagree)
Read All Comments