Asymco's Horace Dediu has released his data on operating profits among the eight top mobile phone vendors for the first quarter of 2012, finding that Apple and Samsung together now hold 99% of the profits with Apple representing the lion's share at 73%. Apple's share was down slightly from 75% in the previous quarter, but Samsung boosted its share from 16% to 26% to shut out nearly all other vendors. 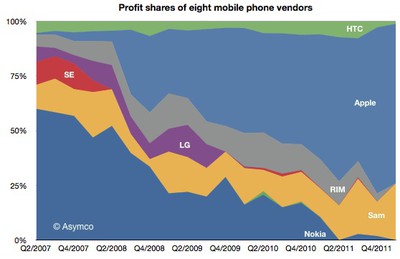 Among the other six vendors, only HTC managed to eke out a profit, taking 1% of the total industry profits. Research in Motion, LG, Sony Ericsson, Motorola, and Nokia each failed to turn a profit on their handset businesses.

The rise of Apple and Samsung at the expense of all of the other major vendors comes as the mobile phone market continues to expand and more expensive smartphones make up an increasing percentage of overall mobile phone sales. Consequently, Apple and Samsung share growth is coming even as the total pool of profits is surging. Over the past two years, profits taken by these top eight vendors has risen from $5.3 billion to $14.4 billion, driven in large part by carrier subsidies worth hundreds of dollars on each of the growing number of smartphones sold.

shaunp
As much as I don't like the current Nokia or Motorola phones, there needs to be more competition. Having Apple and Samsung covering most of the market between them is not a good thing for anyone.
Score: 14 Votes (Like | Disagree)

Now we hear that Apple holds approximately three-fourths of the industry profits, i.e. 75%.

Eduardo R.
It's truly incredible how a company that dominated so much of a market for a relatively long time, such as Nokia and RIM, can fall so rapidly into the abyss in a few years only. Likewise, it's amazing how the iPhone has risen to glory so fast. It's an amazing cel. phone, after all.

Great for Apple and their profits!
Score: 10 Votes (Like | Disagree)

camnchar
So long as this continues, it doesn't matter what Android's market share is.
Score: 9 Votes (Like | Disagree)

Some may be thinking that achieving 30-45% margins on products that are better made and more functional than the competition yet still cost about the same is “easy.”

Tim Cook would disagree :) So would all those other companies.
Score: 6 Votes (Like | Disagree)

As much as I don't like the current Nokia or Motorola phones, there needs to be more competition. Having Apple and Samsung covering most of the market between them is not a good thing for anyone.


Well then the nokias and motos of the world should try building something that someone wants to buy.
Score: 6 Votes (Like | Disagree)
Read All Comments