The Flashback malware affecting OS X systems has gained quite a bit of publicity since it was disclosed last week that over 600,000 Macs have been infected by the malware. Flashback began life last year as a trojan and has morphed into a drive-by download taking advantage of a vulnerability in Java that Apple did not patch until last week, despite Oracle having released patches for other systems back in February.

Over the past few days, a few additional tidbits of information on Flashback have surfaced, including the arrival of some new tools to help users manage the threat.

- As noted by Ars Technica, a new Mac app by the name of Flashback Checker has been released to help users determine whether their machines have been infected. Users have been instructed to use Terminal to enter commands searching for files created by the malware upon infection, and Flashback Checker offers a simple packaging of these commands behind a user interface. While the app is incredibly simple and does not offer assistance with removing Flashback if it is found on a given system, it does provide a more familiar interface for those who might be intimidated by delving into Terminal on their own. 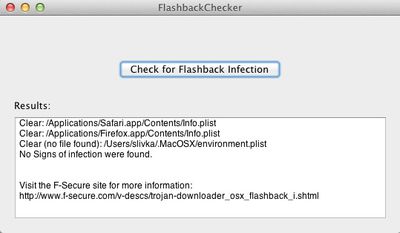 - OpenDNS has announced that it has included filtering of Flashback in its services. OpenDNS offers a number of features to improve resolution of domain names, and the new filtering of Flashback helps prevent infection while also preventing already-infected machines from communicating with the command-and-control servers being used to deliver instructions to the infected machines.

- Forbes has an interview with Boris Sharov of Russian security firm Dr. Web, which was first to bring the magnitude of the Flashback threat to light. In the interview, Sharov describes how difficult it was to even track down the proper team at Apple with which to share their data, also noting how uncommunicative Apple has been throughout the process. In fact, the only sign of interest they've seen from Apple is the company's efforts to shut down the "sinkhole" Dr. Web was using to reroute traffic from infected machines to gauge how widespread the infections are.

“They told the registrar this [domain] is involved in a malicious scheme. Which would be true if we weren’t the ones controlling it and not doing any harm to users,” says Sharov. “This seems to mean that Apple is not considering our work as a help. It’s just annoying them.”

Sharov believes that Apple’s attempt to shut down its monitoring server was an honest mistake. But it’s a symptom of the company’s typically tight-lipped attitude. In fact, Sharov says that since Dr. Web first contacted Apple to share its findings about the unprecedented Mac-based botnet, it hasn’t received a response. “We’ve given them all the data we have,” he says. “We’ve heard nothing from them until this.”

Security experts at Kaspersky Lab, which verified Dr. Web's assessment of Flashback's prevalence, indicate that Apple is indeed taking the proper steps to address the threat, including tracking and shutting down the servers being used by the malware. But the company has little experience with threats of this magnitude and is undoubtedly scrambling to keep on top of the situation.

Supermacguy
Secrecy has it's place for new product announcements, but Apple needs to get its head out of its ass in regard to security issues. Start working with the good guys, communicate a little bit with them. Playing ostrich doesn't help anyone examine or solve problems.
Score: 17 Votes (Like | Disagree)

. In the interview, Sharov describes how difficult it was to even track down the proper team at Apple with which to share their data, also noting how uncommunicative Apple has been throughout the process. In fact, the only sign of interest they've seen from Apple is the company's efforts to shut down the "sinkhole" Dr. Web was using to reroute traffic from infected machines to gauge how widespread the infections are.Security experts at Kaspersky Lab, which verified Dr. Web's assessment of Flashback's prevalence, indicate that Apple is indeed taking the proper steps to address the threat, including tracking and shutting down the servers being used by the malware. But the company has little experience with threats of this magnitude and is undoubtedly scrambling to keep on top of the situation.

nagromme
The end of an era!

* 2001: Macs are just as dangerous as Windows, probably worse, because, even though there has never been a successful real-world malware infestation on OS X, thousands of them are just about to happen any minute now!

* Macs are just as dangerous as Windows, probably worse, because there has been ONE successful real-world malware infestation on OS X.

(I definitely do count this instance: it’s not a virus, not a worm, but it’s not a mere Trojan either—it’s a Trojan that installs itself; meaning the web site itself is the Trojan Horse—and one link is all it takes to get to a web site.)

P.S. I’d like to see more on the other side of the story: first a web site must be compromised, and only then can a Mac visiting it (with Java on) be compromised too. How are these web sites being compromised, which ones are they, how many of them, can we detect them, and can they be blocked if not fixed?
Score: 12 Votes (Like | Disagree)

Myth of the inherent invulnerability of OS X to malware... Busted! :eek:


No one ever claimed OS X was invulnerable to malware. This isn't the first piece of malware for OS X anyhow.
Score: 10 Votes (Like | Disagree)


I’m sure it’s fine, and if you’re paranoid you can compile the source yourself (though if you can compile source, you should be able to perform the manual check easily...)
Score: 8 Votes (Like | Disagree)

dotheDVDeed
And still no fix for Leopard and Tiger users
Score: 8 Votes (Like | Disagree)
Read All Comments