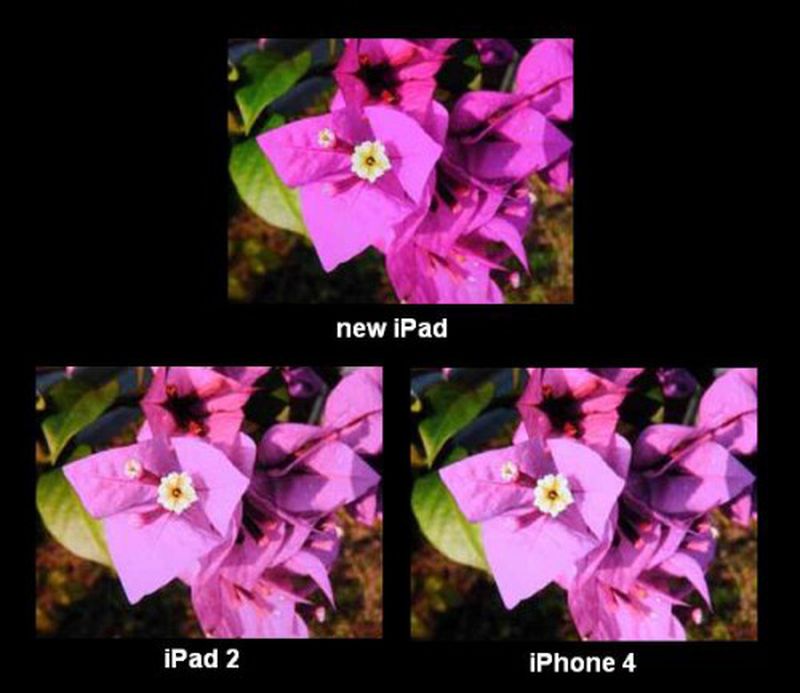 Comparison, though color differences hard to capture in screenshots

DisplayMate has published an extensive "shoot out" between the new iPad, the iPad 2 and iPhone 4. Aside from the much discussed resolution improvements of the 3rd Generation iPad, DisplayMate also confirms that the new screen also has much better color reproduction than the previous generation model.

Apple has taken the very good display on the iPad 2 and dramatically improved two of its major weak points: sharpness and color saturation – they are now state-of-the-art.
...
But there’s more…the new iPad’s picture quality, color accuracy, and gray scale are not only much better than any other Tablet or Smartphone, it’s also much better than most HDTVs, laptops, and monitors. In fact with some minor calibration tweaks the new iPad would qualify as a studio reference monitor.

Besides the color reproduction, they found the new iPad to be slightly less reflective than the iPad 2, but still felt there could be much improvement in this category.

They suggest that with the accuracy and picture quality, the new iPad could find itself used in many new professional level applications.

I saw it in the store and while it's impressive that they have crammed so many pixels in, it has no useful purpose as every single one of the new pixels is going to be used to make everything sharper rather than as extra space to include more things.


Totally agree. I was completely put off by how much easier it was to read on the iPad3. Totally useless.
Rating: 18 Votes

Small White Car
Apple: Just give us the controls to color calibrate these screens, then come out with Aperture for iPad, then bribe Adobe to make Lightroom for iPad (yes, this will be good for you) and you will find that every single professional photographer in the world will have to buy an iPad. It will become just as essential as a tripod.

The new display is good I guess, but the faster processor really floats my boat.


Try enjoying it without the display.
Rating: 10 Votes

The struck me most from the article: "In fact with some minor calibration tweaks the new iPad would qualify as a studio reference monitor."

That is truly amazing. Congrats to the Apple team.

I saw the new iPad today for the first time, at an Apple store. Wow. I will not be able to resist for long. I couldn't tell any difference in weight or size for the iPad 2 (which i use extensively). Sweet Momma!
Rating: 8 Votes

It's the same processor, but with more RAM and a better GPU.

MacFetish
Spent the first few hours just overwhelmed, literally laughing, at how incredible the new display is. I love all the reviews calling this a minor upgrade. If you dramatically improve the most fundamental component of the iPad -- the screen -- it transforms the whole user experience. For me it's night and day.

Text is pin sharp. Pictures so much more lifelike. Not fussed about the camera, I have a dslr for that, but it takes acceptable snaps. I guess I'll use it for Evernote and barcode scans, etc., but probably not much else.


There's a big speed increase, but I've come from an iPad 1. But the wifi performance is not good. My iPad 1 has much better signal pickup, and this one keeps dropping the wifi to go to cellular. Probably just a dud, so it's going back -- Apple didn't blink about providing a replacement.

But the screen! Wow, it is something else.
Rating: 7 Votes

...it has no useful purpose as every single one of the new pixels is going to be used to make everything sharper...


Sharpness isn't useful? Also, according to the article the color accuracy is better. That also sounds useful.
Rating: 6 Votes

The new display is good I guess, but the faster processor really floats my boat.


It's the same processor, but with more RAM and a better GPU.
Rating: 6 Votes

tarproductions
Would love to get a calibration app to enable an iPad as a reference monitor! Imagine that on set, in the field and in the studio!:)
Rating: 6 Votes