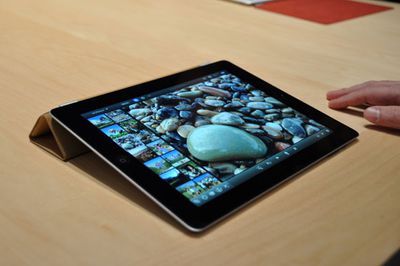 The embargo has lifted on the reviews for the 3rd Generation iPad, and they are starting to trickle out. Here are links and summaries of some of the more prominent reviews:

- Text in most apps will automatically take advantage of Retina display, though with some exceptions (Kindle App)
- "The third-generation iPad had a frame rate 1.6 times that of the iPad 2"
- 3rd Gen iPad almost identical physically to iPad 2
- Video quality of 1080p video recorded was "very good" even in low light
- "AT&T’s LTE network in San Francisco was impressive." with 14.5Mbps/20.6Mbps download and upload rates.

- "Remember how startling it was to go from one of those giant standard definition projector TVs to an HDTV? That’s what this is like."
- Screen is a huge difference from iPad 2.
- Movies and photos are crystal clear

- "Once you see and use the new iPad, there will be no going back."
- LTE: "Really fast. Faster-than-my-WiFi fast."
- LTE: 40 mbps down and 20mbps up on Verizon
- Bigger battery, and does get noticeably warm in lower left corner after prolonged use.

The Verge Review and Video

- "I'm not being hyperbolic or exaggerative when I say it is easily the most beautiful computer display I have ever looked at."
- Verizon LTE: 22Mbps down, 21Mbps in mid-town Manhattan
- Battery tests almost matched Apple's claims.

- "If you already own an iPad 2, and like it, you shouldn’t feel like you have to rush out to buy the new one."
- Was able to use smaller font sizes to read books and email on 3rd Gen iPad vs iPad 2

- "Really, the new iPad should have been called the iPad 2S."
- "Apple just took its white-hot iPad and added the latest screen, battery and cellular technologies."

*LTD*
The display alone, ALONE, makes this worth it. Never mind everything else.

Retina is a phenomenal enhancement of the User Experience. It isn't just a spec.
Score: 37 Votes (Like | Disagree)

mikethebigo
Holy cow, 9.3 score on The Verge. This is going to be epic.
Score: 33 Votes (Like | Disagree)

kugino
it's somewhat ironic that tech writers are the ones who tend to be dismissive about these kinds of "incremental" updates. maybe it's b/c they're so focused on the specs and numbers that have surrounded computers for the last couple of decades.

nevermind that it's really really hard to get it that slim and the screen that beautiful while at the same time increasing the battery by 40%, putting in a new camera system, and all the while, keeping the price the same.

tech writers, for some reason, have no idea how hard it is to make something...maybe that's why they write and not make.
Score: 27 Votes (Like | Disagree)

What do you mean ALONE? Nothing else changed. Well, the size and weight have increased but that's hardly a plus.

For people complaining about the 3rd gen. iPad, you really can't. It offers a phenomenal user experience. The app store, ease-of-use, responsiveness and ecosystem were already amazing, but now you have an iPad with an ultra-high resolution display, more speed, better graphics, a better camera and dictation.

Enjoy it. There's nothing else comparable to the iPad right now.


There hasn't been a tablet comparable to the iPad since it was released.
Score: 23 Votes (Like | Disagree)

Looks like the reviews are going to make all of us pre-orderers just a little more happy tonight.

The screen was the reason I bought it. I fail to see how a spec bump would affect user experience as much as the display, which is the whole point of the device.
Score: 23 Votes (Like | Disagree)
Read All Comments