ABC aired their Nightline special tonight where they took an inside look at Apple's Foxconn factories. Apple allowed Nightline access to the Foxconn factories that produce iPhones and iPads. Foxconn is the world's largest electronics manufacturing company that has contracts with most major U.S. electronics companies. The full video is not available online at this time. 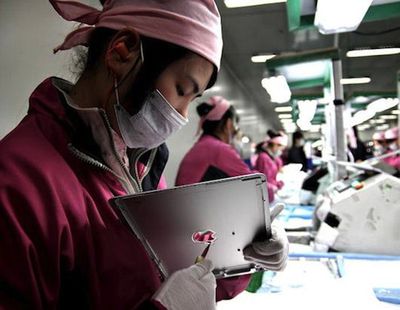 Overall, the report held no real surprises. They summarized many of the events leading up to the bad press surrounding Foxconn's working conditions. The cluster of suicides was mentioned over the past few years that led to the installation of suicide netting to discourage impulsive suicide attempts. Nightline did note that the suicide rate at Foxconn was still below the Chinese national average. Tim Cook, then Apple's COO, flew to China during that time to help coordinate the response. Beyond the suicide netting, pay was increased and counseling offices were set up.

Work on the factory line is described as monotonous with 12 hour shifts with two hour long meal breaks. When questioned, workers complained about cramped dorms and low pay, but the jobs were in high demand with thousands coming to Foxconn for work. Nightline traveled to a nearby village to compare those living conditions which didn't seem any better. The families who remained in the village told Nightline that their living conditions were better with the "young people" working in the factories.

The Verge compiled some interesting statistics from the report:

Nightline's visit coordinated with Fair Labor Association who is compiling their own report on the factories.

Overall, the report was fair-to-positive making it seem like Apple was being very responsive to the concerns.

Update: Video of the segment is now available to U.S. viewers through ABC's website.

How does it take an odd number of hands to make an iPad?

Who's the poor bastard with only one arm?
Score: 38 Votes (Like | Disagree)

budselectjr
"We are unhappy about the pay!!!"

vrDrew
Its worth remembering that a generation or two ago twenty or forty million people in China starved to death (http://en.wikipedia.org/wiki/Great_Chinese_Famine) as a result of the "Great Leap Forward" (i.e. Chinese peasants melted down cooking pots and farm implements to make pig iron).

The kids we saw tonight are living a life of inconceivable luxury compared to that of their parents and grandparents. And their children and grandchildren will live lives comparable to that which we currently enjoy in the US and Europe. Just as our great-grandparents toiled in harsh conditions to build our present consumer society, so these people are doing today.

The Nightline report was about what I expected. You'd get people complaining about low pay, boredom, etc. in most factories here in the US.

The only odd note came at the end, when the reporter suggested that Apple could, because of their profitability, double the pay of all the Foxconn workers. As a trained economist, I groaned at that over simplistic piece of pandering. Imagining the distortions and corruption such an act would introduce into the system - ABC News would be there next year to investigate all the murders, kickbacks, and bribery that occurred as a result. Bottom line: Paying radically "over the market" rate for labor isn't always such a good idea.
Score: 26 Votes (Like | Disagree)

Do they really hand carve the :apple: logo, or did I hear that wrong??


The worker was just shaving the burrs off it, after it's presumably been machined.

This is not going to make those fandroids very happy when articles start popping up about ABC's relatively good report about Apple... :D


Hi, I own an Android phone. Having said that;

This whole report is absolutely ridiculous. Since when was it Apple's responsibility for Foxconn's employees? Since when were client's of a company the representatives of said company? Why is Apple being treated as if Foxconn *was* Apple?

The two are completely independent companys, so why the hell should Apple even 'allow' the media to look into Foxconn's factories? THATS FOXCONN'S CALL.

So, just working 1 day covers their rent. And around 6 day's work covers both their rent and all their food for a month.

I'm assuming they're working 6 days a week. If that's the case they're making about $512/mo. While that is del below the poverty line... wait... I just realized something, everything is in USD. *does more math*

$512USD is about 3200yuan. That's not bad, given that in many cases in rural China, some people make only slightly more than that in a year.
Score: 23 Votes (Like | Disagree)
Read All Comments