As noticed by several users running the developer preview version of OS X 10.8 Mountain Lion, Apple is no longer including its X11 application for running software through the X Window System interface. A popular option for scientists and others seeking to run specialized UNIX software both on local machines and across networks, X11 has been available on OS X for a number of years and has been included as a default install since Mac OS X Leopard. 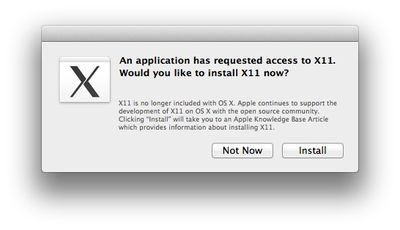 The X Window System has an extensive open source history, with development on the Mac side being handled under the XQuartz project. Apple's X11 application has been based on this effort, although as with many open source projects bundled for use in commercial software, X11 has generally been somewhat behind the latest XQuartz releases. The current version of X11 is 2.6.3, while XQuartz is currently available in version 2.7.0.

With Mountain Lion, Apple seems to eliminating its dedicated support for the X11 application, instead redirecting users to the open source XQuartz project, which it will continue to support.

THis is having an incredible negative effect upon programs in ML.

GIMP wont run even with Xquartz

It runs fine for tons of users. Are you experiencing a specific issue? If so please report a bug.

CrossOver does not launch Windows programs correctly, and instead shuts down

CrossOver ships their own server and does not actually use anything from Apple's X11 except for quartz-wm. I suggest you contact Codeweavers for access to test versions of Crossover that will work on Mountain Lion.

Yeah, there are a few bugs to be worked out

As with most updates, MacPorts will need to adjust to this change. We're working on it, and you can follow the thread I started on macports-dev for specific information.

This isn't just a removal, where reinstallation via XQuartz fixes things all nice and neat.

Please use the latest rc version of XQuartz (currently 2.7.1_rc4). As you probably discovered, earlier versions (like 2.7.0) don't fixup some things.

All the underlying launchd mechanisms that made the Apple X11 function so well with previous versions are gone as well. All the automatic $DISPLAY setting methods, for example, are ripped out. Installation of the XQuatrz package does nothing to fix that.

That's not true. XQuartz sets $DISPLAY for you (and always has). You need to logout and log back in to get $DISPLAY. This is mentioned on the download page and in the installer.

Since there's no way to get the old startx methods to work anymore -- because they're just gone.

What do you mean? The entire startup sequence for XQuartz is based on xinit and startx. If you're having issues, please file bug reports with specific information.

This is not something they'll be fixing. I hope XQuartz manages to do something about it, but there are no guarantees. This is the kind of thing that can become orphanware in a hurry.

About what? File bugs, and they'll get fixed in time. I can't fix bugs I don't know about ;)

Bingo! There was no point in Apple shipping it since we could get the latest version via open source. Only problem here is that Apple is no longer guaranteeing that X11 will work when a new version of the OS ships.

Note that All of X11 is based off of public APIs except for a small set of "private" APIs in a library that lives at /usr/lib/libXplugin.dylib ... as long as that library is updated for future releases, it should "just work"

Its possible for OS X to break X11 and the open source XQuartz team to have to quickly produce an update to support new operating system releases.

Yeah, but seeing as how the "open source XQuartz team" is 99% @apple.com, I think that's probably not difficult...

Its probably not much of a concern if you wait a couple weeks after the release of a new version of OS X to upgrade. They should have any required updates available to XQuartz within a few weeks (or possibly before) release of OS X, given the availability of developer previews.

Can someone confirm that Matlab works with XQuartz?

Make no mistake. XQuartz doesn't work in its present form on ML.

Don't know if I can make it plainer.

Is the fact that removing X11 causes various applications to break not a valid concern?

It is a valid concern. Please report problems.

I occasionally use GIMP, but according to various posters, it no longer works, even with XQuartz. Will you be buying me a similar photo editing application so I can work with my photos when 10.8 comes out?

No, but I will fix bugs if you report them. gimp runs fine here, but I'm by no means a gimp power user.
Score: 38 Votes (Like | Disagree)

THis is having an incredible negative effect upon programs in ML.


Yeah. What they ought to do is release some sort of "Developer Preview" 5 or 6 months ahead of the release of the new OS so that developers heard about these things and had time to produce fixes.
Score: 33 Votes (Like | Disagree)

Is ML really an update? It seems like a downgrade in many respects.

Is ML really an update? It seems like a downgrade in many respects.

KnightWRX
I guess this will be another "dumbing down" thread. :rolleyes:

Anyone who was using X11 on OS X (myself included) never really bothered with Apple's version anyhow and went straight to XQuartz.
Score: 17 Votes (Like | Disagree)

displaced
Too early to be worried...

So, the facts are:


* Xquartz is the open source X11-compatible window server for Mac OS X
* Xquartz is maintained by Apple-employed developers. It's an Apple-sponsored open source project.
* The 'X11' app bundled with various OS X releases has historically been a snapshot of the Xquartz code, renamed and integrated with the Mac OS X release.
* There was some extra 'glue' which made the Xquartz snapshot known as X11.app behave extra nice with OS X ($DISPLAY setting, etc)


So the actual change in Mountain Lion is that:


* Apple will no longer be bundling re-labelled Xquartz versions with OS X.
* OS X will instead prompt the user to download Xquartz when an X11-dependent application runs.

Rather, the Xquartz team (still Apple employees, remember) need to build up their process for producing releases independently of the OS X team. This is where the 'glue's got lost. Whatever OS X used to do for X11.app/Xquartz, Xquartz is now going to have to do for itself. From their point of view, it's almost certainly too early to start down that road since ML is still such a moving target. Hence the lack of integration in the present DP state.

I'm failing to see the malice, neglect or otherwise here. Rather, it's letting the Xquartz team control their schedule and deliver their updates independently of OS X without having to rely on people seeking out and installing Xquartz on their own.

Bear in mind also that the third-party developers will also take a little bit to adjust. They've been used to being able to test against 'the X11 that comes with <OSX_VERSION>. Instead, they'll need to test against the current release of Xquartz.

We're only about 24hrs into Mountain Lion's public history... so let's give everyone involved a chance to sort things out.
Score: 14 Votes (Like | Disagree)
Read All Comments