TechCrunch reports on Evi, a new Siri-like offering from True Knowledge that has launched for iOS devices [App Store] and as a beta for Android devices. While Siri provides a fair amount of integration with Apple apps and services such as reminders and calendaring, it is currently limited to the iPhone 4S, while Evi is compatible with all iPhone, iPad, and iPod touch devices running iOS 4.0 or later.

She – we’ll call this Artificial Intelligence a she – returns amazing results when consulted. Given that Siri is just not very good at giving answers which aren’t about the US, Evi might just be the Siri for the rest of the world, especially since Evi wil run on any Andoid or iPhone, and not just the 4S. I’ve seen her in action and Evi is very, very smart.


Based on the same Nuance voice recognition technology found in Siri and the licensing of which accounts for Evi's $0.99 price tag in the App Store, Evi draws upon a database of nearly a billion facts as well as integration with Yelp and other services to deliver an array of information that seems to compare favorably to Siri's abilities.

Install Evi on an iPhone 4S and compare it to Evi. Ask “How do I make apple pie?”. Siri is unable to provide a direct answer and so asks whether you want to search the web. Evi provides a list of recipes with web links.

Ask “Who was President when Queen Elizabeth II was born”. Siri is unable to provide an answer and suggests performing a web search. Evi determines who Queen Elizabeth II is, when she was born, the dates when she will have been a teenager and then compares this against which US presidents were in office over that time, delivering the results of both serving US presidents during those years. Not bad huh.

Evi offers the option of voice or text input, local results for the United States and United Kingdom, and a built-in browser view for quick access to web links from results.


:rolleyes: You mean than you Nuance for letting apple use THEIR technology...Apple did not invent bugger all here.

Evi is a great option for those of us not stupid enough to move from a 4 to 4s just for a voice assistant gimmick ;)

JonneyGee
For those who will inevitably call Evi a copycat, this is good for Siri as it will require Apple to continue developing Siri. Hopefully this will spur on Apple to release an API for apps soon.
Score: 12 Votes (Like | Disagree)

AlphaDogg
Too bad it is not integrated into the OS like Siri is.
Score: 8 Votes (Like | Disagree)

I am officially 100% fed up with Apple Apologists saying Siri is still beta....Apple uses it as a selling point in print and tv commercials. It is NOT beta. It is in a production environment and being touted as a great tool by its owner and NEVER in their tv commercials is the word "beta" uttered. Never. 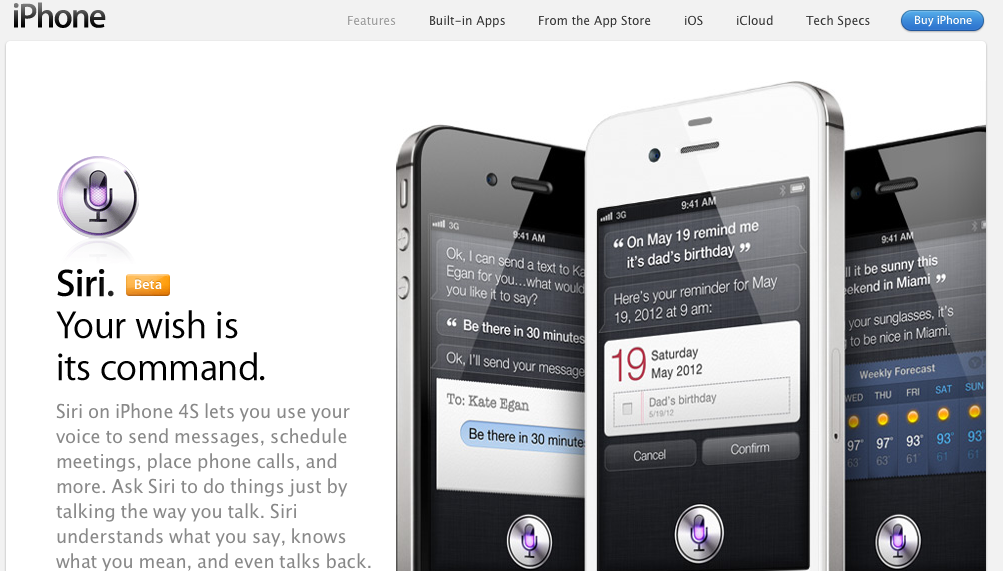 Apple says it's in beta.
Score: 7 Votes (Like | Disagree)

When the Apple train comes in, everybody rides.

Don't you already know this?

Don't you already know this?
Score: 7 Votes (Like | Disagree)
Read All Comments

Saturday April 17, 2021 4:43 am PDT by Sami Fathi
Reliable leaker known as l0vetodream has hinted that Apple may debut its rumored redesigned and colorful iMac at its "Spring Loaded" event on Tuesday, April 20. In a tweet, the leaker posted an image of Apple's logo used for marketing the upcoming event and an image of the retro rainbow Apple logo alongside the colorful lineup of G3 iMacs. Apple leaker Jon Prosser previously reported that...
Read Full Article • 263 comments

Monday April 19, 2021 11:30 am PDT by Juli Clover
The upcoming 12.9-inch iPad Pro will be thicker than the previous-generation version, likely due to the inclusion of the mini-LED display. We've heard several rumors about the change in thickness, and now leaked design images have confirmed it. A source that designs accessories for Apple devices sent MacRumors a series of photos that feature exact dimensions for the new iPad Pro models, and...
Read Full Article • 175 comments

Monday April 19, 2021 7:51 am PDT by Sami Fathi
Following the removal of the app in January, Apple will now allow the social media app Parler to return to the App Store following changes to how the social media network moderates content, CNN reports. On April 14, in a letter to Sen. Mike Lee and Rep. Ken Buck obtained by CNN, Apple said that the app has improved the way it moderates content, and says those changes are "sufficient" for it...
Read Full Article • 223 comments