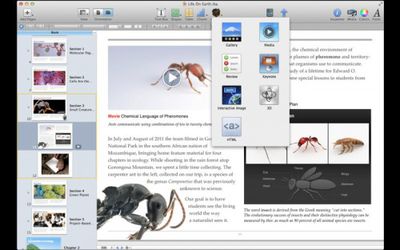 Today, during their education press event, Apple announced the availability of the iBooks Author App that allows users to create interactive iBooks on their Mac.

Now anyone can create stunning iBooks textbooks, cookbooks, history books, picture books, and more for iPad. All you need is an idea and a Mac. Start with one of the Apple-designed templates that feature a wide variety of page layouts. Add your own text and images with drag-and-drop ease. Use Multi-Touch widgets to include interactive photo galleries, movies, Keynote presentations, 3D objects, and more. Preview your book on your iPad at any time. Then submit your finished work to the iBookstore with a few simple steps. And before you know it, you’re a published author.

The App allows you to start with a number of templates and then customize your book with images, videos, multi-touch widgets and even Keynote presentations. You can then preview your book on your iPad and then submit it to the iBookstore for sale or free download.

iBooks Author is available for free in the Mac App Store. [App Store]

Tell that to PPC users.

So I feel for the PPC users out there. It's only been 6 years since they switched to Intel and those PPC Macs have at least another 20 to 25 years left on them.

But seriously, I don't know how people work on those old machines. I have a 2008 MacBook Pro and that's getting to be slow as molasses in working with Photoshop and Lightroom. And don't even get me started on Aperture...that takes forever. I will do an adjustment then the CPU pegs to red and you wait and wait and wait for the adjustment to actually show up. It's not like I'm running out of RAM either as I have 8 gigs in this thing.

I guess if I was just surfing the web and doing emails or something, a PPC would still be okay. I just can't fathom doing Photoshop on them, but I guess some people do it all the time. But come on...time marches onward. Do you really expect Apple to keep developers around that code for the PPC with new products?
Score: 12 Votes (Like | Disagree)

Saladinos
Nice, but still no iBooks reader for OSX :(
Score: 9 Votes (Like | Disagree)

It's the "Apple way" to force you to upgrade.


Why would you expect new functions to be back-ported to old OS versions? As a software vendor myself, I don't know why anyone would do this-- the development and support costs are non-trivial. Users do need to pay for this, and maintenance fees or upgrades are alternative ways. A $30 upgrade fee seems pretty reasonable to me.
Score: 7 Votes (Like | Disagree)


I'm not complaining about the price - in fact, I already own Lion. But for a variety of reasons that I won't go into right now, upgrading will take a lot of effort, and I'm not willing to do it quite yet. It's alright though; I'm not exactly an author. But I look forward to playing around with this.
Score: 7 Votes (Like | Disagree)

"Now anyone can create stunning iBooks textbooks, cookbooks, history books, picture books, and more for iPad. All you need is an idea and a Mac."

Oh great. Now anyone can write a textbook! You don't need to be a scholar or even an authority. All you need is an opinion, time, and a Mac. I can't wait for the "textbooks" on how the world was created in seven days.


Yeah, that whole freedom of speech and freedom of the press thing really sucks.

Holly crap! You have 3 other options: Windows, Linux and Google Chrome. No one is forcing you to buy Lion.


If you've been following along for the past 12 years, every new version of OS X has been worse than the last, according to the peanut gallery. These people should just stick with 10.0 and be happy with that.
Score: 6 Votes (Like | Disagree)

This is just trolling or plain stupidity. I'm sorry, but a $29 upgrade to Lion shouldn't break the bank for anybody who had enough money to purchase a Mac in the first place .... much less complaining about it as a requirement to use some FREE publishing software they're offering people.

I don't get all the anti-10.7 sentiment out there anyway? Sure, there are situations where you won't want to upgrade a given machine past Snow Leopard. I've got one Mac like that myself. (You may still rely on older apps that require Rosetta to run because they're still coded for the old PPC architecture.) But the same was said about "Classic" MacOS, and eventually, 99.9% of us managed to move forward and let go of some outdated software that wasn't ever upgraded to run OS X native.

There's actually quite a bit "wrong" with 10.6. For example, it has a lot of security weaknesses they overcame in 10.7. There's also a lot of "little stuff" improved in 10.7 that's simply nice to have -- such as the elimination of auto key repeat when you hold down a keyboard key for several seconds. (Who ever really used that, ever since the days of trying to draw artwork on line printers, made of lines and lines of AAAAAAAAAAAAAAAAAAAAAA and what-not?) Instead, 10.7 does something sensible -- cycles a letter through various accent-marked versions for you.

Apple, one of the most cash rich corps in the world and this s/ware is for the latest version of Lion only? Talk about trying to screw everyone in a time of global recession. WTF is wrong with 10.6?