Several Apple-related apps and accessories are being previewed at CES 2012. Here are a couple of the more interesting ones we've run across. 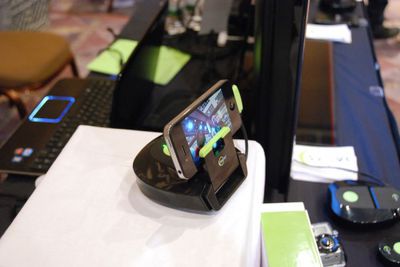 Swivl is a motion tracking mount for your iPhone. We previously covered the announcement of the product back in November.

The motorized mount registers the movement of the remote control (which you can attach to your body) both vertically and horizontally. Using infrared and RF sensors, the mount actively moves the iPhone to keep its camera centered on the subject. It could be used for activities such as video blogging and FaceTime.

See it in action:


Swivl will cost $159 and is available for pre-order now and will ship in one to two months.

Magisto is a new video app that debuted in the App Store this week that features automated editing of your raw video recordings. Magisto analyzes your videos to enhance them with music, effects, and transitions. The end result can then be shared with your friends.

Users can record a new video in the app or choose existing videos in the Camera Roll for processing. After specifying a title and soundtrack and uploading the video to Magisto's servers, the company's software will automatically select the most interesting clips and apply transitions and effects to create a polished final video.

The motorized mount registers the movement of the remote control (which you can attach to your body) both vertically and horizontally. Using infrared and RF sensors, the mount actively moves the iPhone to keep its camera centered on the subject. It could be used for activities such as video blogging and FaceTime.


Absolutely! No need for that third person. Talk about facial recognition...
Score: 2 Votes (Like | Disagree)

I like the idea, but not the execution. I want something that I don't have to carry, preferably an app with facial recognition.

Barring that, I'd rather not need the camera to catch what I'm using. That thing is huge. It has uses from what I can see, but for every day purpose, it looks a tad big (in this form)...

Impressed with the price point and utilizing a technology who's patent has expired a few years ago. However, the specific tracker you need handle is the deal breaker. This fob can get easily lost and needs visibility by the tracker camera in the base. Also the name is too descriptive for a strong copyright IMO. Finally, I view the industrial design as second rate. Looks like something out of the SolidWorks example projects with about a week of tweaks and bends.

What is needed is the IR distance and jester recognition as implemented in the Kentix technology. Have the camera on the base and just track the nearest object to the center of the view. You can even move your arm toward the device and it will follow that since it is closer. Put in a delay so quick movements are not tracked with a user adjustable parameter that you control via an app.

IR Trackers like this have been around for a while but are still only in the professional realm and not consumer priced. I give that a year or so if this doesn't taint the market. If so, we are seeing a four to five year delay at this price point for IR distance camera tracking.
Score: 2 Votes (Like | Disagree)

ericinboston
Swivl is interesting...$159 is pretty steep, however. If it sells for $79 or $99 I think it will do well. I wonder how much quality is put into Swivl...it seems jerky and how many useful hours can it promise?
Score: 1 Votes (Like | Disagree)
Read All Comments