While Apple and Samsung remain locked in a war involving numerous lawsuits related to alleged patent and design infringement in their tablet and smartphone products, Apple has now brought cases for the devices into the mix. As reported by Bloomberg, Apple disclosed during an Australian court hearing that it has sent a notice of infringement to Samsung over the company's tablet and smartphone cases, and will be pursuing legal action.

Apple Inc., which on Dec. 9 lost a bid to keep Samsung Electronics Co.’s Galaxy 10.1 tablet out of Australia, claims the case for the device and cases for Samsung phones infringe its patents and registered design.

Apple issued the notice of infringement to Samsung in Australia over the cases, and will file a statement of claim, Apple’s lawyer Stephen Burley said at a hearing in Sydney today. Samsung’s lawyer Katrina Howard said at the same hearing the company was served with the notice that the cases infringe at least 10 patents.

It is unclear exactly what Samsung cases Apple is targeting with its new infringement claims. 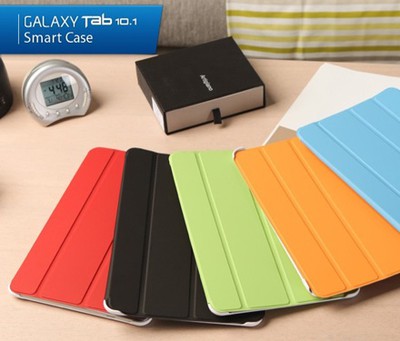 Samsung did, however, find itself amid controversy earlier this year after accessory company Anymode offered a "Smart Case" for the Galaxy Tab 10.1 that closely resembled the iPad 2 Smart Cover. While the product initially appeared to carry Samsung's stamp of approval and came from a company with familial connections to Samsung, a blog post issued by Samsung quickly clarified that the product was not in fact approved by Samsung and was immediately pulled before it had begun selling.

But given that the Smart Case was not directly produced by Samsung, it does not seem that Apple's claims of infringement would relate to that product. Samsung currently offers several styles of cases for the Galaxy Tab 10.1, and it is not immediately clear which designs Apple might consider to be infringing upon its own case designs.

Update: Samsung has released an official statement on the issue, noting that the term "case" was misinterpreted in early media reports as referring to protective case accessories. In fact, the term was referring to the external design of the devices themselves.

We would like to clarify that the additional claims filed by Apple in Australia do not relate to protective case accessories, as has been indicated in some media reports. In fact, the intellectual property asserted are patents related to the utility of mobile devices and design rights related to the external appearance of devices.

We are confident we can demonstrate that the GALAXY range of devices is innovative and distinctive, and will take all available measures to ensure our products remain available to consumers in Australia.

When you cannot innovate, you litigate.

Imitation is the greatest form of flattery... the truth is out Samsung is in love with Apple.
Score: 21 Votes (Like | Disagree)


Did you even read the article? That image and product is in no way associated with Samsung, they are created by a third party.
Score: 18 Votes (Like | Disagree)


I was going to post, "How long until someone sees that picture plus the title and doesn't bother reading the article".

Too bad there will be another 100 people entering this thread saying "OMG, Samusung can't do anything original, look at those case!!!!". :rolleyes:
Score: 17 Votes (Like | Disagree)

samcraig
People on here not only avoid READING the full article - but they also FAIL in READING posts before they post their own comments which are clearly ignorant.
Score: 15 Votes (Like | Disagree)

LOL. Unlike iPad's smart cover which is produced/sold by Apple, the cases in the picture were not even produced by Samsung. I also wonder what specific patents Apple has for phone cases? Does it even has any phone cases in a first place or are they just patent trolling as usual?

We should expect that for the next lawsuit Apple will produce iPad-style smart covers for Galaxy Tab and then sue Samsung for them!
Score: 14 Votes (Like | Disagree)
Read All Comments