Dow Jones Newswires reports that Apple has filed a request for a preliminary injunction that would bar Samsung from selling its new Galaxy Tab 10.1N in Germany. Samsung launched the 10.1N earlier this month as a design-tweaked variant of the original Galaxy Tab 10.1 that is already barred from sale in Germany under an earlier injunction.

Apple has requested a preliminary injunction, and the Duesseldorf regional court has scheduled a hearing on the matter on Dec. 22, a spokesman for the court told Dow Jones Newswires on Tuesday.

The move has no effect on sales and distribution of the product, Samsung said in an emailed statement, while Apple repeated earlier comments that it intends to protect its intellectual property.

Samsung slightly tweaked the design of the Galaxy Tab 10.1 hardware to create the 10.1N, resulting in a frame that wraps around slightly onto the front of the device along its two short sides. Apple clearly feels that this design is not sufficient to overcome the ruling that the Galaxy Tab design infringes upon Apple's designs for the iPad, and is thus pursuing the new injunction. 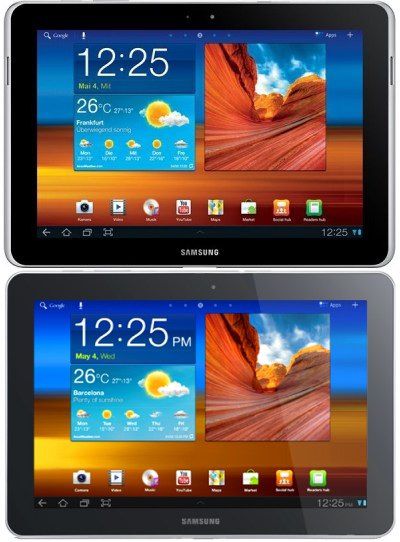 Galaxy Tab 10.1N (top) vs. Galaxy Tab 10.1 (bottom)
Meanwhile, FOSS Patents confirms that Apple's initial injunction awarded against the Galaxy Tab in Germany does in fact cover all three announced sizes of the device: 10.1, 8.9, and 7.7. Apple cites that injunction in a filing in its U.S. case against Samsung, illustrating how the company is using its string of wins over Samsung in international courts to bolster its U.S. case.
[ 232 comments ]

AJH1993
Apple is making a lousy new impression on me
Score: 34 Votes (Like | Disagree)

iEvolution
Wow Apple give it a rest.

Samsung tablets are about as much of a threat as Geo Metros are to Ferrari sales.
Score: 31 Votes (Like | Disagree)

Apple is making a lousy new impression on me

It wasn't when Apple... I mean, its not for the fact that Apple has never offered 'choice' in their products? Removable batteries? Flash card slots in devices (iphone)? It wasn't for apple slamming other competitors (march keynote when they ripped off Google Cloud, RIM's BBM, Android's notifications?). What about Apple's dancing around Creative patent for the UI navigation?

The list goes on. Apple as a corporation is far from a little angel. Only a true fanboy would have to think otherwise (not saying you, but there are far too many people brainwashed into thinking that everything apple does is right).
Score: 14 Votes (Like | Disagree)

You're gonna get downvoted to hell with this post. But apple is really making it hard for me to respect them. It's been like that since they started suing left and right


I've been disgusted with Apple ever since the iPod had its monopoly on the digital audio player.

That clever deal with Samsung to provide Apple dibs on NAND memory at low cost before any other competitor could sell a product at a fair price was TOTAL BULL.

Price fixing at its best.

Apple owes a LOT to Samsung for its success. If the iPod was never created or got off the ground like it did, it would NEVER have been the company it is today.

So why the hell have people been defending Apple so damn much?

As for the downrank, I dont care, I expect that on macrumors, its been very obvious as history has shown that any criticism towards apple is always downranked, not matter how much in favour of the consumer it may be in. Its blind ignorant worship at its finest.

Apple could release a product, throw in the typical limitation (choice) and I could point it out and I'd get downranked.

Basically, NO! Apple is a holy entity that cannot be questioned! Makes me sick to my stomach that people are THAT obsessed over an effing BRAND.

I buy apple's product for their PURPOSE, not for any other reason.
Score: 12 Votes (Like | Disagree)

rmwebs
Yet another pathetic bullyboy move from Apple. Just get over it and move on for goodness sake! My respect for them drops by the lawsuit/day.
Score: 12 Votes (Like | Disagree)
Read All Comments