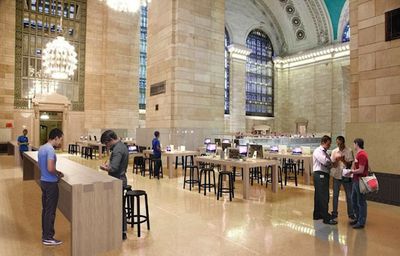 Rendering of Apple's Grand Central Terminal retail store
9to5Mac reports that Apple is set to announce tomorrow its plans for opening the company's new retail store in the historic Grand Central Terminal in Manhattan. Apple had been said to be trying to get the store open by mid-November for the holiday shopping season, but it still appears to be unclear whether it will have the store open in time for Black Friday later this week.

From what we have now heard, Apple will be filling the store with stock and applying the finishing touches this week putting the the actual opening of the store on Black Friday or shortly thereafter. The goal all along has been to get the store open for the holiday shopping and to make a big splash with Apple’s new crown jewel of retail.

The store's 300 staff members have been in training for some time now, and are currently dispersed to other New York City stores for final training ahead of the store opening.

Photo from techfootnote
techfootnote grabbed some photos of the black screening surrounding the under-construction store, which reveal some large panels on the front of the barrier that are said to potentially be hiding large video display boards to highlight the store's opening.
Related Roundup: Apple Black Friday
Related Forum: Community Discussion
[ 35 comments ]

JHankwitz
It's bound to be a winner. Convenient for so very many people.
Score: 3 Votes (Like | Disagree)

rloechner
there is without a doubt a few or one giant monitor behind those black panels. Here are two pics I took just before getting on the train. One of the panels is moving and you can see behind.. Where there is a giant white display and what looks like a train schedule type of video playing.. Here are the pics. I tried to walk up and get closer but was denied! The third pic is from behind the panels .. And it looks like the displays are built in glass. Sorry for the poor quality photos.

That store is going be crazy busy with folks just killing time on the internet waiting for the train. Seems like it is going to closer to one big advertisement than an actual store. On the other hand, I could see a lot of folks just grabbing an Air on the way home, very convenient.


That's what all the Apple stores are about. It wouldn't surprise me if 60-70% of patrons are already Apple owners simply checking email or checking out a new app.

But eventually, those 30-40% who aren't Apple owners decide to buy something because they feel comfortable. And once they buy one, the others follow. Back when Apple first decided to open their own stores, I was a naysayer, even though I agreed that most other dealers presented Apple badly. But you can't aruge with massive success and they've maintained that success in spite of the fact that they've opened up selling in the mass merchants as well.

I think there's a fairly large body of commuters who walk (or ride) from their offices to Grand Central, are always in a rush and unless they visit an Apple store in a mall on a weekend, never get to an Apple store. This Grand Central store will service them and I think eventually will lead to big sales especially since a lot of those commuters live in the gold coasts of Westchester and Connecticut. But most commuters at Grand Central don't have a long wait - during rush hour, the trains leave every 15-20 minutes or so, so that could be an issue or it could help because one could simply wait for the next train.
Score: 2 Votes (Like | Disagree)

The store's 300 staff members have been in training for some time now...

I wonder if the store's 300 rats have also been training for some time now... :)
Score: 1 Votes (Like | Disagree)
Read All Comments

Friday November 25, 2022 4:40 am PST by Mitchel Broussard
Black Friday is winding down for 2022, but many Apple products are still seeing major discounts. In this article, you'll find every Apple device with a notable Black Friday sale. We'll be updating as prices change and new deals arrive, so be sure to keep an eye out if you don't see the sale you're looking for yet. Note: MacRumors is an affiliate partner with some of these vendors. When you...
Read Full Article • 30 comments