While Apple launched iOS 5 and iCloud last week, the company pushed back the debut of its paid iTunes Match service in the United States until the "end of October". While iTunes Match had been in beta testing with iTunes 10.5 developer releases, the feature was removed from the public release and instead folded into an iTunes 10.5.1 beta that will presumably debut alongside the service.

Apple appears to be moving closer to a launch of iTunes Match in the United States, as the Music section of the Settings app in iOS 5 has now gained a toggle for turning iTunes Match on and off. That toggle had been present for developers testing the service, but had disappeared in recent days for many developers. The toggle now appears to have returned for developers and is visible to the general public as well. 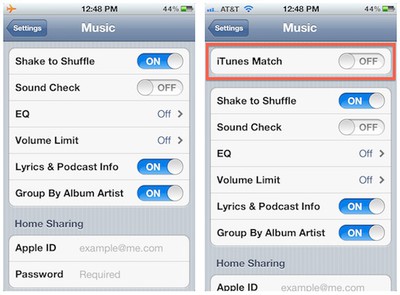 iOS 5 Music settings before (left) and after (right) addition of iTunes Match toggle
Non-developers turning on iTunes Match on their devices will not yet be able to sign up for the $24.99/year service, as iOS 5 pops up an alert instructing users to sign up through iTunes.

With iTunes 10.5.1 not yet available to the general public, signups for iTunes Match are similarly not yet functional. Apple is, however, advertising the service as "coming soon" on the front page of the iTunes Store. Interestingly, iTunes Match is reportedly only launching in the United States by the end of the month with other countries set to come later, but Apple is optimistic enough about the service's international timeline that the "coming soon" flag is showing for users in a number of other countries. So far today we have received reports of the "coming soon" flag from users in Australia, Austria, Canada, Germany, Ireland, and the United Kingdom.

Patriot24
Hopefully it goes without saying, but please backup your music before enabling Match. That way if something goes south, you'll always have your original files.

This message was brought to you by common sense in conjunction with foresight. :)
Score: 8 Votes (Like | Disagree)

Still hoping for a way to "test my library" first before signing up. Why pay if only 1/3 of my music can be matched?

Here’s how it works: iTunes determines which songs in your collection are available in the iTunes Store. Any music with a match is automatically added to your iCloud library for you to listen to anytime, on any device. Since there are more than 19 million songs in the iTunes Store, chances are, your music is already in iCloud. And for the few songs that aren’t, iTunes has to upload only what it can’t match. Which is much faster than starting from scratch.

blastair
I apologize if this has already been answered, but I have yet to see a definitive answer:

What if I only pay once? Will all of the matched songs still be available once the year is over? Once a song is matched is it always matched? To download to a new computer, for example?
Score: 7 Votes (Like | Disagree)

Patriot24
$25 per year to keep my entire music library safe and upgrade all (or most) of the tracks to higher quality is a no-brainer.

Remember when you had to pay an additional $0.30 per song (at least, I think that's what it was) to upgrade the quality, and that only covered songs you purchased through iTunes? If you have thousands of songs to be upgraded, the cost comparison is pretty silly.
Score: 5 Votes (Like | Disagree)

Slash366
this is the message if you try drag / drop.
Score: 4 Votes (Like | Disagree)
Read All Comments

Thursday July 22, 2021 3:22 pm PDT by Juli Clover
iDOS 2, an app designed to allow users to play classic DOS games, will soon be pulled from the App Store, the app's creator said today. According to iDOS developer Chaoji Li, he tried to submit an iDOS update with bug fixes to the App Store, but was told that the update was rejected because it violated the 2.5.2 App Store guideline that says apps cannot install or launch executable code.Durin...
Read Full Article • 236 comments