October 4th Media Event to Be Held at Apple's Headquarters?

AllThingsD reports that Apple's iPhone media event apparently scheduled for October 4th will be held at the company's headquarters in Cupertino, California rather than the Yerba Buena Center for the Arts in San Francisco as has been typical for their iPad and iPod events.

Sources close to the company say the demonstration — currently scheduled for Tuesday October 4, a date first reported by AllThingsD — will be held at Apple’s campus in Cupertino, California.

The report notes that it is unknown why Apple has chosen its own Town Hall Auditorium for the event, but offers a couple of theories including the possibility of uncertainty in locking down a date preventing Apple from booking an outside venue or a desire to give new CEO Tim Cook a more intimate venue for the first major product introduction under his official watch. 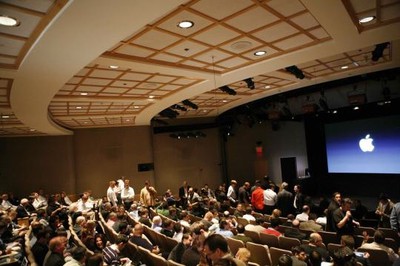 Apple's Town Hall auditorium (Source: CNET)
Apple has certainly used its on-campus facilities for media events in the past, most recently last October's "Back to the Mac" event. The site has also been used for the company's iOS media and developer preview events typically held each spring ahead of new hardware releases, as well as last July's press conference to address concerns over antenna performance on the iPhone 4.

Apple's iPhone introductions have until this year taken place at San Francisco's Moscone Center as part of larger events, with the original iPhone first being shown at Macworld Expo and later introductions coming at the company's Worldwide Developer Conference (WWDC). The Yerba Buena Center for the Arts has been Apple's major off-campus site for those media events not associated with conferences such as Macworld and WWDC. It has typically hosted Apple's fall media events that have focused on iPod and iTunes, and has also been the site of Apple's two iPad introductions.

Samuriajackon
U built a town hall...might as well use it.
Score: 33 Votes (Like | Disagree)

Nailed on IMHO, all fits

If the keynote was taking place in downtown San Francisco or whatever then Steve has to drive or be driven down there, likely in heavy traffic, tiring for a man who is not very well

He would already be on campus doing his chairman's job and holding meetings etc so it easy for him just to pop into the auditorium, less tiring, less effort for him, smaller stage

I am 99.99% certain we will see Steve playing an active role in the launch

I love these theories. Where do people get this stuff?

So Jobs is too weak to sit in a limo and be driven to the Moscone Center but he's on campus holding meetings.

You will not see Jobs at the announcement as his presence would only serve to overshadow Cook and the new product(s).
Score: 30 Votes (Like | Disagree)

easy4lif
anyone notice that its 10 years ago that they introduced the original ipod in October, in the same venue that their using for this event
Score: 23 Votes (Like | Disagree)

Maybe because they really are just introducing an iPhone 4S with minor upgrades and perhaps don't want to draw TOO much attention to that fact. :)


This is Apple, it will get huge attention regardless of where they present it or how many people are in the audience.
Score: 20 Votes (Like | Disagree)

QuarterSwede
The most reasonable explanation from a thread (https://forums.macrumors.com/showthread.php?t=1234128) already on this:

I don't see the location of the keynote reflecting the exact (5 vs 4S) product being launched.

What I do see, is a very dynamic, shifting date for launch, which led to an inability to secure the typical Yerba Buena location. Not knowing the exact launch date makes it a little tough to secure a venue. Whereas if the event is held in Cupertino, Apple can make the announcement when they're damn good and ready.

Something is definitely up over Apple. Something is causing a delay. Bad screens on the (rumored) bigger iPhone 5 screen? iOS 5? who knows... Let the theories and speculation begin!

Monday June 21, 2021 7:17 am PDT by Hartley Charlton
Users appear to be underwhelmed by Apple's upcoming iOS 15 and iPadOS 15 updates, according to the findings of a new survey by SellCell. The survey asked 3,000 iPhone and iPad users, evenly split between men and women, aged 18 or over in the United States, what they thought of iOS 15, iPadOS 15, and the naming of the upcoming iPhone 13 lineup. Over 50 percent of all of the survey's...
Read Full Article • 401 comments

Monday June 21, 2021 6:33 am PDT by Joe Rossignol
Apple will likely unveil its next-generation "iPhone 12s" or "iPhone 13" lineup in around two and a half months from now, and ahead of time, Taiwanese research firm TrendForce has outlined its expectations for the devices. A summary of TrendForce's expectations:Apple will unveil four new iPhones in September, including a mini model, a standard model, and two Pro models. September is the...
Read Full Article • 60 comments