Microsoft's Windows 8 to Include an App Store Too

With industry trends clearly moving towards digital distribution, Microsoft will also be making the move with an "App Store" in the upcoming Windows 8. Microsoft introduced the Windows 8 team in a blog post earlier today. 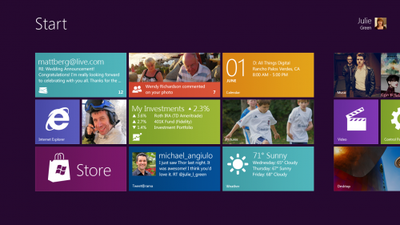 Windows 8 is a notable departure from Microsoft's latest desktop operating system, with many interface elements drawing from their Windows Phone 7 platform. The tile-based appearance offers an easy touch interface, while a more traditional desktop interface remains for legacy applications.

Apple has been a strong proponent of the App Store distribution model, moving in that direction faster than its competitors. With OS X Lion, Apple initially launched it as an exclusive App Store download, only offering a USB thumb drive option several weeks later.

Back in February we reported that Apple was making steps towards eliminating boxed software at their retail stores. In late July, Apple discontinued many of their boxed software items, leaving only the digital versions behind.

It's not clear yet if Microsoft will publicly brand their software store as an "App Store", as Apple has not taken kindly of the use of the term by other companies. Microsoft too had opposed Apple's "App Store" trademark application. In retrospect, their motives may have been due to this same intended feature in Windows 8. Microsoft already offers a store for apps called "Marketplace" in Windows Phone 7.

MythicFrost
LOL I read that as "Microsoft's Windows 8 to be included in (Mac) App Store too" rofl... I was like... whaat?
Score: 28 Votes (Like | Disagree)

ksgant
Seriously, we need to all stop caring about "oh, they just copied ____". or "oh, ____ had that feature first". It's nonsensical. I want products...from any company...that work. If that means they stand on the shoulders of who came before with features, so be it. If Windows wants an application store, why do I care if Apple had one first? If Apple is updating iOS to have more robust notifications, why do I care that Android had it first? Do they want a fricken prize?

Why not take it to the extreme? Why not criticize the iPad for using an LCD screen with "oh, Compaq had LCD screens on their laptops back in the 90's, this is nothing new, Apple is just copying others by using an LCD". Makes as much sense.

I believe it should be called Program Store for Windows. But i agree Apple doesn't deserve exclusive rights to that term.

It'll probably be Marketplace, like on WP7. And to all the people saying Microsoft is copying Apple, there were app stores before Apples one, they just weren't successful. Not a new concept. Apple copies just like everyone else.
Score: 18 Votes (Like | Disagree)

Apple does not deserve exclusive rights to the term 'App Store'. This is almost as stupid as Cadbury wanting to trademark the colour purple, for chocolate wrappers.
Score: 18 Votes (Like | Disagree)

slrandall
And on a slightly un-related note, it almost looks as though MS is trying to beat Apple to the unified-across-all-devices OS ... Interesting.
Score: 12 Votes (Like | Disagree)

Hummm.... can't seem to figure out why so many Windoze lovers and Android lovers feel compelled to come to an Apple enthusiast forum and rant and rave anti Apple junk???

I guess when you go from almost dead to one of the most influential, most innovative and most valuable company in the world in about 15 years you attract trolls and haters?

I just don't get why they feel so compelled to come here and try and convince us that Windows or Android is better? I don't hang out at the Android or Windoze forums and bash them?

This is a RUMOR site. For speculation and discussion.

Maybe your lost, can I direct you home to the APPLE FAN CLUB (http://www.fanpop.com/spots/apple) ?

Just because we are interested in Apple rumors it doesn't mean we should be frothing at the mouth with Apple rabid comments hating on other technology. Some of us are capable of having more than one company in our lives and aren't as "Dedicated" ....as you :rolleyes:
Score: 11 Votes (Like | Disagree)
Read All Comments