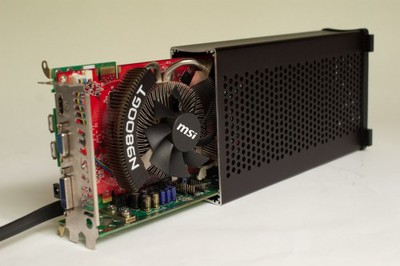 Current generation ViDock
VillageTronic has started work on a Thunderbolt version of its ViDock PCI expansion chassis that allows laptop owners to use PCI Express graphics cards on their computers. They lay out the following usage scenario:

Imagine using your thin and light laptop PC during the day on the job, at school, or at the local café then arriving home, or dorm room, plugging it into your ViDock and firing up your latest PC game on a large format monitor. Just plug in one cable into your laptop PC and you instantly have a powerful 3D workstation with a big display, a big keyboard and your pointing device of choice. You are ready for gaming, video transcoding, photoshop, 3D design, watching full 1080p HD movies, and more!

The ViDock presently interfaces through laptops using an ExpressCard slot, but we've heard that development has started on a Thunderbolt compatible version. ExpressCard slots are a rarity on Apple's laptops, presently only available on the 17" MacBook Pro. By offering a Thunderbolt version of this expansion chassis, even 11" MacBook Air customers could theoretically drive an external graphics card.

Villiagetronic originally posted a feeler for such a device on their Facebook page, promising to pursue development if there was enough interest. They've also discussed the possibility of adding USB ports, Ethernet and other ports to the expansion dock. Separately, we've heard the chassis itself will adopt an aluminum "Mac" look, unlike the presently shipping ViDocks (pictured above).

Sony had previously introduced a similar but proprietary dock system for their upcoming ultra-thin 13" notebook. It's no surprise that companies are starting to work on similar solutions for the broader market, and Villiagetronic isn't alone with a similar Sonnet device also having been announced.

However, could it work if the graphics chip only needs to send its output directly on to the display? I don't know about the electronics necessary here at all - pure speculation on my part.


Apparently lots of people talk a lot without knowing much what they are talking about. While high end graphics cards can use 16 PCI lanes instead of the four the Thunderbolt provides, that doesn't mean they actually improve performance. PCI lanes are only used for sending textures and commands to the graphics card. Giving the graphics card plenty of video RAM avoids having to resend textures, and Thunderbolt is still tons faster than the hard drive that these textures are read from. And you don't send _that_ many commands to the graphics card, especially with physics on the card. And what makes a high end card really high end is the amount of pixelshader code that it can run, and that is completely on the card and doesn't go over Thunderbolt at all.

And the normal case is that a graphics card sends data directly to the display. So an external card could have a DVI or HDMI adapter, or Displayport, or even Thunderbolt so that you can attach two displays, but not connected back to the main computer. It basically works exactly the same as any old graphics card that you buy and put into a MacPro or a desktop PC.
Score: 4 Votes (Like | Disagree)

Thats a cool idea. Wouldn't surprise me if Apple themselves have played around with the idea too.

would love to see this on thunderbolt displays. it would actually influence me to buy one.


Think of the new Apple Thunderbolt Display if Apple put a monster GPU in the display and when you dock your MacBook Air it turbo charges it with a beautiful display and ports already there! This sounds like a logical progression for mobile computing coexisting with power users! :cool:
Score: 4 Votes (Like | Disagree)

...if the drivers for Lion exist, which they probably won't. Also depending on the power supply the true high-end graphics cards might not get enough juice.

I'd imagine anything like this would have to come with its own power supply to be viable in the first place, so I wouldn't worry.

P.S. So now you people understand why some of us see a bright future for thunderbolt. Buy yourself a low-end mac mini, then get yourself one of these babies, and presto! A gaming PC. All we need now is for AMD/NVidia to start provide their own drivers, then we'd be all set. I wonder if NDIS could be ported to Mac OS?
Score: 4 Votes (Like | Disagree)

" ... Imagine using your thin and light laptop PC during the day on the job, at school, or at the local café then arriving home, or dorm room, plugging it into your ViDock and firing up your latest PC game on a large format monitor. Just plug in one cable into your laptop PC and you instantly have a powerful 3D workstation with a big display, a big keyboard and your pointing device of choice. You are ready for gaming, video transcoding, photoshop, 3D design, watching full 1080p HD movies, and more! ..."

The Sonnets come with 150W or 75W power supplies. The Radeon HD 6970 requires about 360W (http://www.guru3d.com/article/radeon-6950-6970-review/11). So, as I said- the high end graphics cards will still be out of reach unless they decide to stick a rather large PSU on the back of those things.

Of course, not everyone will need the best of the best. I imagine for most people the bay PSU will suffice for whatever they want to put in it.

Please see the multiple posts in this thread disputing this fact. Its annoying when people spread information that is not correct. To summarize, modern GPUs support 16x but do not utilize that potential bandwidth except for the highest end cards. Even then, 4x is enough to get over 90% of the potential out of the highest GPUs so this implementation could greatly benefit those who are willing to pay for the option.
Score: 2 Votes (Like | Disagree)
Read All Comments