CNN is the first 24-hour news network to offer live streaming of both the flagship CNN channel and CNN Headline News to iPad and iPhone owners, and at CNN.com/video, via the TV Everywhere initiative. 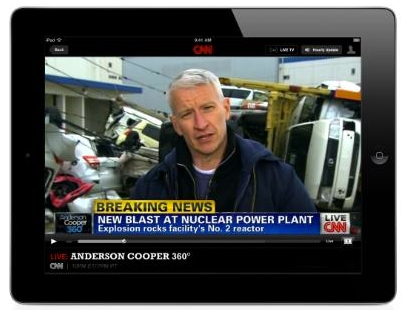 It only works for users who already subscribe to CNN via AT&T, Comcast, Cox, DISH Network, Suddenlink and Verizon. Time Warner Cable is the notable, ironic exception, mostly because CNN is owned by Time Warner -- a company that once was the parent of Time Warner Cable. The two are related only in name at this point.

In addition to streaming CNN and Headline News, CNN will also offer up to 4 other streams of breaking news and events. Today, CNN was streaming live coverage of the US Senate, and video of the Atlanta and New York City skylines.

radiogoober
This is further proof that major web sites are planning on using HTML5 in their future and not Flash. Good bye Flash! It (wasn't) fun!
Rating: 4 Votes

Northgrove
Heh... TV "Everywhere" -- if you subscribe to these networks! (and live in the US?)
Rating: 3 Votes

Gotta Hankerin
This is another great step toward channels becoming apps rather than numbers on a screen. I hope, in the near future, the requirement for paid tv service goes away.
Rating: 2 Votes

*LTD*
Post-PC era. The gradual decline of Flash. Steve Jobs' usual prescience about the web and, well, people in general.

The evidence is really piling up. CNN is a big name in news.
Rating: 2 Votes

j-a-x
Having to buy cable TV service to use this is lame. I won't to use my Apple TV / iPad / Mac to REPLACE the need to pay for cable service. If I have to pay for cable TV in order to watch TV on my iPad that just defeats the purpose.
Rating: 1 Votes


CNN is the first 24-hour news network to offer live streaming of both the flagship CNN channel and CNN Headline News ...


Yes, I suppose that CNN would be the first to offer live streaming of CNN and CNN Headline News... :rolleyes:

However, I've been watching the stream of Al Jazeera with the Al Jazeera app on my 1G iPod Touch for quite some time...
Rating: 1 Votes

room237
When are they going to start charging for it?
Rating: 1 Votes

bluemonkeyguy
thats ghey, i login with my cox credentials and i get a notice "Cox doesn't support or does not allow viewing of CNN." :confused:
Rating: 1 Votes

What was first? World's first in US? First on "tv everywhere" ? First outside an app,and directly in safari ? Or first 24-streaming news channel ? I dont understand.

They are certainly not the first 24 hour streaming news channel in english. France24 and even Aljazeera have broadcasted for months..
Rating: 1 Votes

just to add to the ever growing list, but the Sky News app on ipad is really good, live streaming etc etc!

The iphone version does live streaming on 3g:)
Rating: 0 Votes
[ Read All Comments ]