Final Space Shuttle Lifts Off With Two iPhones Aboard 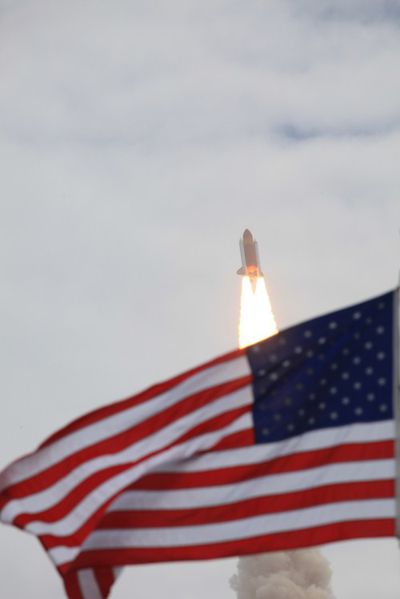 This morning at 11:29AM EDT, space shuttle Atlantis took off from Kennedy Space Center in Florida on the final shuttle mission, STS-135.

The launch marks the end of the more than 30-year Shuttle program to explore and learn more about our world, the solar system, and the universe.

The STS-135 crew will deliver the Raffaello multi-purpose logistics module filled with more than 8,000 pounds of supplies and spare parts to sustain space station operations after the shuttles are retired.

Atlantis is also carrying two iPhone 4's to the International Space Station (ISS) for experimentation. The "space certified" iPhones are loaded with a specially designed app, SpaceLab for iOS (downloadable from the App Store [iTunes]) that will let astronauts conduct several experiments:

Limb Tracker - This navigation experiment will involve taking photographs of the Earth and matching an arc to the horizon through manipulation of an overlay. This performs the function roughly equivalent to a “manual” horizon sensor. It will yield an estimate of altitude (height above the surface) and “off axis” angle, a measurement of the angle of the image with respect to the Earth's center.

Sensor Cal - This sensor calibration experiment uses a series of photos of a reference image, combined with propagated information using three-axis gyro and accelerometer measurements to calibrate the gyros and the accelerometers (i.e. bias and scale coefficients). This will improve the knowledge and accuracy of subsequent measurements.

State Acq - State Acquisition - This navigation experiment uses a series of photos of a reference image and of the Earth, combined with information from the three-axis gyro and accelerometer, to estimate the position of the spacecraft (latitude and longitude). The position estimation is generated by manipulating and matching a wireframe overlay of the Earth's coastlines to the acquired Earth image(s). Performing multiple sequences, separated by a known amount of time, can permit estimation of the spacecraft's orbit parameters.

LFI Lifecycle Flight Instrumentation - This experiment will characterize the effects of radiation on the device by monitoring certain areas of memory for Single Bit Upsets - an unintended change in value of a memory location caused by exposure to radiation.

Once the experiments are complete, the phones will be returned to Earth via the Russian Soyuz vehicle, as early as this fall. Flight data will be collected, analyzed, and then shared via the SpaceLab app.

The three-axis gyroscopes and accelerometers in the iPhone 4 are expected to perform very well in zero-gravity, and are being tested as an alternative to much more expensive equipment.

Earthbound users can replicate some of the tests by downloading the SpaceLab app, but, understandably, some tests must be simulated to account for the presence of gravity.

Atlantis is on a 12-day mission and is scheduled to dock with the ISS at 11:06AM EDT on Sunday. For more information and to follow STS-135, visit NASA's main space shuttle website.

Grey Area
I hope they remember to put the phones into airplane mode.
Score: 39 Votes (Like | Disagree)

garethpauljones
I dread to think what the roaming charges would be like! :D
Score: 22 Votes (Like | Disagree)

Skika
Well at least it wont shatter when they drop it.
Score: 22 Votes (Like | Disagree)

According to Android Central, there are a few Nexus S phones on board too.

You'd still be trying to scroll without a lag by the time the space shuttle returns. lolol
Score: 14 Votes (Like | Disagree)

JTToft
Is there anything left that the iPhone hasn't been used for?
Score: 10 Votes (Like | Disagree)

It's a shame that the president has decided to abandon such an important program for our country and its morale.
Score: 8 Votes (Like | Disagree)
Read All Comments