As noted by Patently Apple, a newly-published patent application from Apple reveals an interesting take on the idea of using metaphorical gestures to share data between devices.

Building upon file transfer mechanisms found in such iOS apps as Bump that allow users to exchange contact information, photos, and other data between devices in close proximity, Apple proposes a number of gestures such as "pouring" and "vacuuming" that could add some additional visual interest to the mundane process of data transfer. 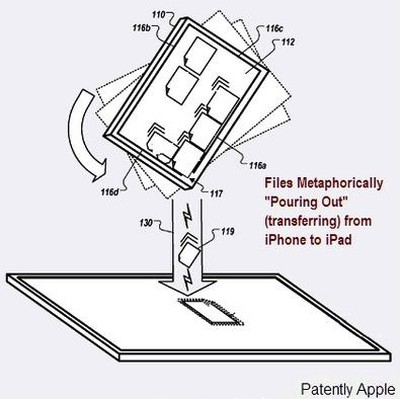 One example presented in the patent application demonstrates how a user could "pour" a set of files to transfer them from an iPhone-like device to a tablet device similar to the iPad. Files displayed on the iPhone's screen could animate the pouring process by appearing to respond to gravity as the iPhone is tipped, and files could behave in differing manners to provide more visual interest, such as by having larger files appear to be heavier than smaller ones and thus moving more slowly in the pouring process.

Apple describes other gestures to initiate the actual file transfer, such as tapping on the device as it is tipped for pouring or requiring a flick or other gesture to overcome a "speedbump" or other barrier and set the files moving to the other device.

Finally, Apple describes how devices could sense their relative locations within a room and allow users to simply flick data toward another device or to make sweeping gestures to broadcast the data to multiple devices in a general direction.

something3153
This seems like something that would be cool for five minutes and then be annoying.
Score: 15 Votes (Like | Disagree)

Aeolius
Might I show you the metaphorical gesture I might make, when I accidentally drop my iPhone on my iPad when it slips out of my hand?
Score: 8 Votes (Like | Disagree)

Bankerts
I saw a Microsoft Surface do something like this when a mobile device was placed on the..well..surface. I like the idea though.
Score: 7 Votes (Like | Disagree)

Roessnakhan
So like what webOS does with the Pre and TouchPad, but with more eye candy animations?
Score: 7 Votes (Like | Disagree)
Read All Comments

Friday June 18, 2021 9:41 am PDT by Sami Fathi
After a long wait, YouTube for iOS is officially gaining picture-in-picture support, allowing all users, non-premium and premium subscribers, to close the YouTube app and continue watching their video in a small pop-up window. In a statement to MacRumors, YouTube says that picture-in-picture is currently rolling out to all premium subscribers on iOS and that a larger rollout to all US iOS...
Read Full Article • 176 comments

Sunday June 20, 2021 4:15 am PDT by Tim Hardwick
A wireless network naming bug has been discovered in iOS that effectively disables an iPhone's ability to connect to Wi-Fi. Security researcher Carl Schou found that after joining a Wi-Fi network with the name "%p%s%s%s%s%n" his iPhone's Wi-Fi functionality was left "permanently disabled." Changing a hotspot's SSID did nothing to correct the problem, with even a reboot failing to make a...
Read Full Article • 124 comments