Time Warner Cable today announced the release of a major update to its TWCable TV app for iPad, increasing the number of channels available for live viewing to over 100 and adding new channel guide, remote control, and DVR management capabilities when used with compatible set-top boxes. 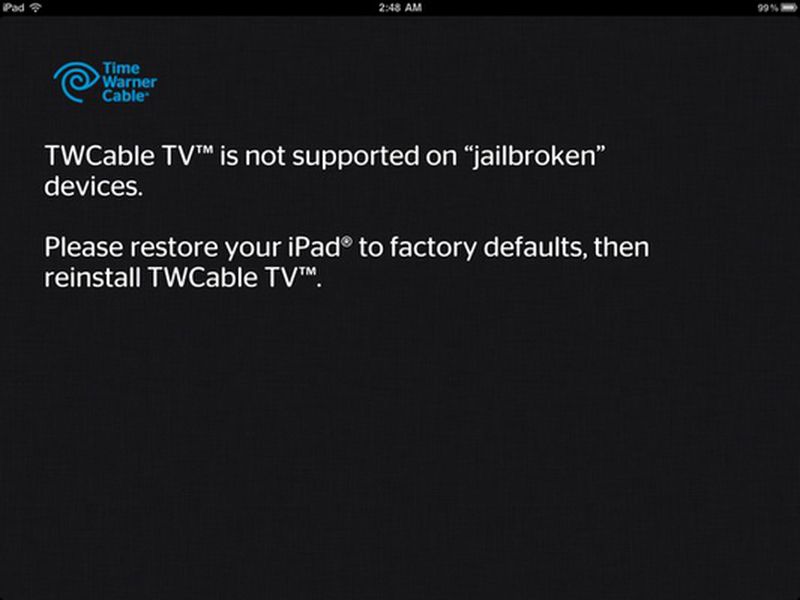 But as noted by Engadget, the updated app also brings one other unpublicized change: jailbreak detection that renders the app inoperable on jailbroken devices. Time Warner Cable offers no specific reason for its disabling of the app for jailbroken devices, although it seems likely that the cable company fears unauthorized tools that could facilitiate unauthorized usage of the live TV feeds being sent through the app.

On a separate note, Time Warner Cable and Viacom have been said to be negotiating a settlement to a legal dispute that saw Viacom channels such as Comedy Central, MTV, and Nickelodeon quickly removed from the TWCable TV app after its debut, but the Viacom channels have yet to make their return to the platform.

Brenzo
What's so idiotic is that there is no reason to block access to the jailbreak community as the only way to access the content in the first place is to be a paid subscriber. This will only anger existing customers.

What will be interesting is to see if other app developers start implementing a similar jailbreak detection "feature" into their apps.
Rating: 4 Votes

macduke
Tomorrow: Jailbreakers release a new tool to get around Time Warner jailbreak blocking code by spoofing such and such and adding a line of code to the file in the blah blah blah...

Seriously, why try to fight the Jailbreakers? They will always find a way. You're wasting your time and resources, Time Warner Cable. If anything, they will see this as more of a challenge now that you've publicized it. Good luck with that.

I wish Mediacom would get off their lazy butts and make a cool iPad app, but HAHAHAHAHA who am I kidding we're talking about Mediacom! Hahaha a stupid local provider that is so backwards that when troubleshooting connection issues on the phone, they don't understand and get very confused when I tell them I don't have Internet Explorer, lol.

how about you just don't jailbreak your phones? :rolleyes:


Somehow I don't think that will make much difference since this is all about the iPad.

How about you just read the article and keep your snark to yourself? :rolleyes:
Rating: 2 Votes

Stridder44
I hate cable companies so much.
Rating: 2 Votes

Tomorrow: Jailbreakers release a new tool to get around Time Warner jailbreak blocking


lol yeah this was the first thing I thought of. There's no point TWC! Resistance is futile!
Rating: 2 Votes

Well, at least Skype only displays a warning message (once) and works fine for me (Yes, my iPhone's jailbroken).
Rating: 1 Votes

BeSweeet
Time Warner Cable is the dumbest company around. Their Internet, phone, and TV services are horrible and unreliable. Now they try to shut out jailbreakers? Pitiful. If people want access to the files for the app, then they can do so WITHOUT being jailbroken. Fire up iPhoneExplorer for Windows or Mac OS X, and BAM. View all the files. People can then change them up or view them.
Rating: 1 Votes

mrtune
I have a feeling that they are the first of what could be many developers following suit and intentionally breaking their apps on jailbroken devices.

I could easily see HBO, Comcast, and others following suit.

42streetsdown
i imagine someone'll come up with a work around. or people simply won't install the new version
Rating: 1 Votes
[ Read All Comments ]