While Apple has received significant criticism for stripping out a number of features from its professional-level video production software in the transition to Final Cut Pro X, the company has said that it will be updating the new application on a regular basis, and has acknowledged that it is working on restoring some of the lost features.

One of those missing features is compatibility for XML projects, a popular open format that Apple had embraced in Final Cut Pro for several years before eliminating it in Final Cut Pro X. According to Philip Hodgetts, Apple has apparently stated that it is working on a replacement for the XML workflow, as well as the ability to import XML from older projects into Final Cut Pro X. 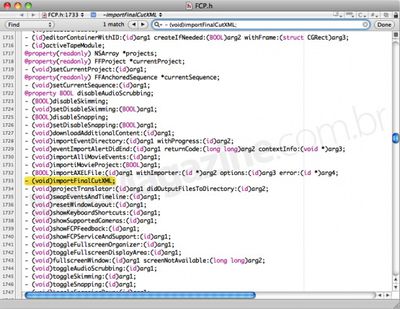 That XML import support may in fact be coming relatively soon, as some digging by MacMagazine.com.br [Google translation] reveals that the XML importer is already present in Final Cut Pro X in some form, but has not been turned on.

MacMagazine.com.br's source not only found references to an "importFinalCutXML" function within the code, but also was able to run the function to bring up an "Import XML" window that is unfortunately not yet functional.

You got what they meant though, right? Don't be so pedantic - noone cares the exact terminology for headers and includes - these are VIDEO EDITORS, not nerds.


AriX offered the MacRumors bot a chance to fix the text. Exact terminology does matter in a written article, or I might as well post that Final Cut Pro X does offer multicam (oh I meant you can import from different kinds of cameras).

K.B.
terminology be damned--- if this had been included in the release it would have quieted at least 10% of the outcry over FCPX.

I don't understand... were they working on a deadline for release? I sure never heard one and it didn't seem 'overdue' to me. Why not take another week and get this working?

Another needle in their ass because someone pulled the trigger too soon on releasing this product.
Score: 3 Votes (Like | Disagree)

I'm the guy who discovered all that stuff about XML inside FCPX.

Unfortunately It seems like the methods I've found aren't for importing of old FCP7 XML files, but a new kind of XML called "AXEL", which stands for "Apple eXchange Editing Language". The original blog post about It has screenshots of this thing actually working: http://mcmgz.in/1wf

Two interesting factoids:
- The new interface is internally called "AquaPro"
- FCPX is ready for Lion and has some frameworks built in specially for the new feline

ANOTHER UPDATE:
I just wanted to let you know that I've also found some stuff in there about making the media browser and the video preview fullscreen, and It works just fine, even in Snow Leopard. I don't understand why Apple leave all that good stuff out even when It's perfectly functional, It seems like they want to keep It out of the first version just so they can come a few months later with a new release and make a lot of buzz about It.

There are two screenshots of the method calls found inside the code: http://migre.me/58z5A

gmcalpin
Ouch. Just having this in the shipping FCPX 1.0 product would have made the release A LOT smoother for Apple.

Not "smooth," by a longshot, but smoother. Apple's getting torn apart by its best friends (Pogue, Gruber, etc.) over this.
Score: 1 Votes (Like | Disagree)

AriX
importFinalCutXML is a method, not a function. And you don't "run" a function, you call it. (Just nitpicking here, but what was written looks kinda weird to a programmer.)
Score: 0 Votes (Like | Disagree)

winston1236
such a sloppy release
Score: -2 Votes (Like | Disagree)
Read All Comments