All Things Digital reports that in the latest update to its Hulu Plus application, television streaming company Hulu has brought itself into compliance with Apple's new In-App Subscription rules, taking advantage of a recent shift in Apple's stance to simply remove an external link to sign up for the paid service rather than offering subscriptions inside the application under a system in which Apple would take 30% of the revenue.

All Hulu had to do was strip out the link that sent potential subscribers to its Web site, because Apple's new rule will ban "apps that link to external mechanisms for purchases or subscriptions to be used in the app."

As initially deployed back in mid-February, Apple's In-App Subscription mechanism allowed publishers to set prices, but also required them to offer the same offers inside their applications as found through external mechanisms. Under the program, Apple would retain 30% of the revenue on subscriptions generated within the applications as a fee for bringing the subscriber to the service. The new terms were set to go into effect on June 30th for existing subscription-based applications, leading many to wonder how services such as Hulu and Netflix would deal with the requirements. 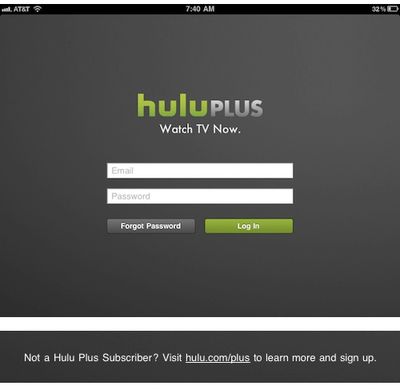 External subscription link text (bottom) removed from Hulu Plus login screen
But with Apple reversing course earlier this month, those services now have a much easier path to compliance with Apple In-App Subscriptions terms. Under the revised terms, publishers with subscription programs are not required to also offer In App Subscriptions, provided that they do not link users to external purchasing mechanisms.

Consequently, apps like Hulu Plus can meet the requirements by simply having their subscription links removed from within the app. Hulu loses the benefit of direct link-outs for new subscribers, but does not have to offer In-App Subscriptions that would undoubtedly result in significant amounts of revenue being diverted to Apple. Users interested in subscribing to Hulu will simply have to visit Hulu's site on their own, manually entering the address or finding it through a search engine, in order to sign up.

All Things Digital notes that the solution adopted by Hulu is likely to make its way to a number of other prominent services such as Netflix and Rhapsody, although it is unclear how others such as Amazon's Kindle Store will be able to satisfactorily comply with the new rules going into effect next week without removing a significant convenience factor of being able to purchase individual e-books via link-outs from the app itself.

Clever move. I wonder if Apple will do anything against that, they seems to shift their policies every week..


unlikely, since this was the intended purpose of the rule changes. So apps like Hulu and Netflix could continue to exist in the app store

No. If App developers are going to use the Apple infrastructure to sell subscriptions then Apple should get a share of the revenue.


Which infrastruture is using Amazon when a Kindle book is sold?
Score: 6 Votes (Like | Disagree)

Forgive him. Everybody wants their free ride in Apple's iTunes Store.

I think removing the links is a good outcome that balances Apple and the third parties' commercial interests without making things particularly difficult on consumers. It puts the ball in the third parties' court to make the user experience easier for the consumer by providing them a way to subscribe through an in-app purchase.

I agree that using the in-app purchase would be better, but 30% is a ridiculous fee, it's obvious it's not going to work for most third parties, some of which already have in place their payment processing infrastructure.

Also to "cripple" a bit these apps might be a double-edged sword. I love my iPhone but I would never have bought it without the Kindle app. If using the Kindle app on the iPhone becomes a nuisance I will surely consider switching to a different device instead of the new iPhone model.
Score: 4 Votes (Like | Disagree)

Actually, MS controlled 90% of the *consumer* OS market. Which points out the importance of defining what the relevant market is in determining whether there is a monopoly.

Apple's iOS does not have a monopoly. Android is neck and neck with iOS. Apple can do whatever it wants with it's AppStore, because you don't NEED an iOS device to do anything. You have choices. This was not the case back in the Windows days - there were very little legitimate options.

When you buy a Kindle book on Kindle for Mac or Kindle for Windows do you use Apple or MS infrastructure?


Are you missing the fact that iOS belongs to Apple?

The thing I don't understand about this argument is this: Apparently Apple owning iOS means that if I download a 3rd-party application through Apple's mechanism for downloading applications on their operating system (ie the App Store), Apple is somehow entitled revenue when I conduct an economic transaction within that third-party application and only with/between that third-party, because Apple gave them the benefit of distributing the original 3rd-party application in the App Store. Yet, if I download or buy an application from a 3rd party on Apple's mechanism for accessing acquiring applications over the Internet on a regular pc (ie downloading an application through Safari on OSX) or the same from Microsoft (downloading an application through IE on Windows), then the OS company isn't entitled revenue from the third-party transaction. (of course this is changing with the advent of the Mac App Store and Lion, but you can still access apps through the Internet on Safari and other web browsers, to be installed in the OS, whereas on an iOS device, you have to go through Apple's official mechanism of the App Store, as far as I know).

I just don't understand how it was found anti-competitive back in the day for MS to only offer IE pre-installed on a Windows PC, and yet today Apple can lock down iOS devices and set all the rules for dealing with applications installed on their devices to their hearts content. I really enjoy Apple and iOS devices, but I'm just so curious if anyone can explain the legal distinctions to me. Thanks!
Score: 3 Votes (Like | Disagree)
Read All Comments