Users With Multiple Monitors: Lion's Full-Screen Apps Are Not For You

Apple has been touting full-screen apps as a major feature in OS X Lion. By all accounts, it works very well to remove distractions and help users focus on the task at hand. 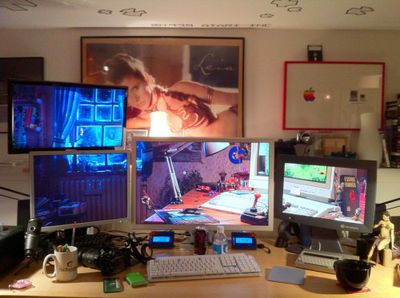 For multiple-monitor users, however, full-screen apps don't live up to the hype. When full-screen mode is turned on, Lion dims supplementary monitors (putting up the "linen" background) leaving extra screens as little more than expensive paperweights.

I think that's a picture of my room in a parallel universe where I never got up the nerve to ask a girl out.
Score: 14 Votes (Like | Disagree)

ImageWrangler
The guy had me at Asteroids on the ceiling but then lost me at the creepy huge Princess Leia.
Score: 11 Votes (Like | Disagree)

Full screen apps are going to be great for those of us with 11" MBAs.


I have been using the Lion previews on an 11" MBA and full screen apps are, in fact, great on it.
Score: 10 Votes (Like | Disagree)

Bigdaddyguido
Well, if the point of fullscreen apps is to focus on the one task, it does seem like it would defeat the purpose to leave the other monitors busy.

Why do people keep saying lion isn't for power users? I can see that maybe this feature isn't, but things like server being a mere $50 upgrade, versioning, reader, resume and the upgraded file vault, and little things like clipboard sharing for screen sharing all seem like great features for power users. Sure, some of these features could be obtained with good third party software or terminal hacks, but doesn't the widespread nature and refining count for something?

I mean, almost anything apple does outside of a new file system or the elusive resolution independence would be stuff power users have come up with anterior methods of obtaining, no?
Score: 9 Votes (Like | Disagree)

Yup, I noticed this. Mind you, I've never liked the idea of full-screen apps on a computer. IPad and iPhone fine but not on a computer. When you've got a 30" ACD you get used to having many programs and many windows open at a time. Expose is awesome with that. Even on my MBP I never use full screen mode in any apps, I find it too limiting - so many things require me to reference or copy something from another app or folder anyway.

I'm not that happy about Lion so far, the focus on full screen apps I can work around but the modification of how Spaces works is irritating - it looks like you can only have a row of spaces, no columns meaning those of us that are now used to working with a grid of spaces are stuffed.


Full screen apps are going to be great for those of us with 11" MBAs.
Score: 9 Votes (Like | Disagree)
Read All Comments