It seems that Apple seeks to standardize this data flow. Thus, the new iMac is also compatible with the 450 Mbits/s. For that, Apple changed their Airport card and also installed 3 antennas (instead of 2 before), something indispensabie to be able simultaneously to use 3 channels of 150 Mbits/s.

In order to take advantage of the increased speeds with compatible base stations such as the latest AirPort Extreme and Time Capsule, users must be sure to set the base station's options to use the 5 GHz band and to allow use of wide channels.

You just said it. Internal networks. Transferring files between multiple computers, streaming 1080p video from your desktop to your laptop...

Especially useful if you do network backups (say to a Time Capsule or NAS) regularly.

I have a gigabit/CAT6 network in the walls of my house. Surely, this is useless since my internet connection is only 40 mbps, right? Not exactly.
Score: 3 Votes (Like | Disagree)

Gotcha...streaming video may be a good use for this extra bandwidth...what is the necessary rate for HD streaming?


The real need for gigabit ethernet shows in back-up.
Score: 2 Votes (Like | Disagree)


All my photos live on a NAS, therefore a speedy WiFi connection is a must. I use a Canon 5d mark II, and the raw files from it are ~30 MB each, which must be loaded on my computer for correction. After a day of shooting, i can have 16 - 20 GB of pictures that have to be uploaded to the NAS over wifi

Besides, a lot of wireless bandwidth is lost due to interference and overhead ... the more theoretical bandwidth you can get, the better overall real-world performance.
Score: 2 Votes (Like | Disagree)

Thanks! Could you give details on the actual throughput? The link speed is the maximum theoretical throughput which is never achieved. When tested at release it was much slower than a lot of other models - I'm wondering if this dramatically increases transfer speeds?

There is the distinct possibility of no real world improvements - some 3x3 models just released perform no better than the best 2x2 implementations.

I did some tests:

First I copied a file from my TimeMachine drive connected to the APE:

I got a steady 14MB/s, as you can see in the screenshot.

Then I did the same test with the Ethernet Cable connected: 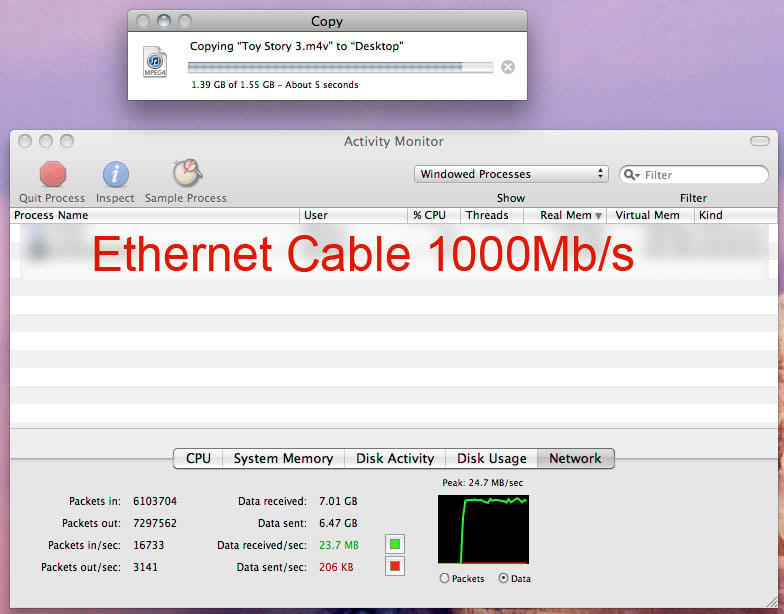 And, of course, it was faster, but not twice as fast as one would expect...

Then, I disabled "wide channels" (necessary for the 450 rate as described in this thread) and my link speed dropped to 216 (I was expecting 300, it must be some kinda noise or interference...) 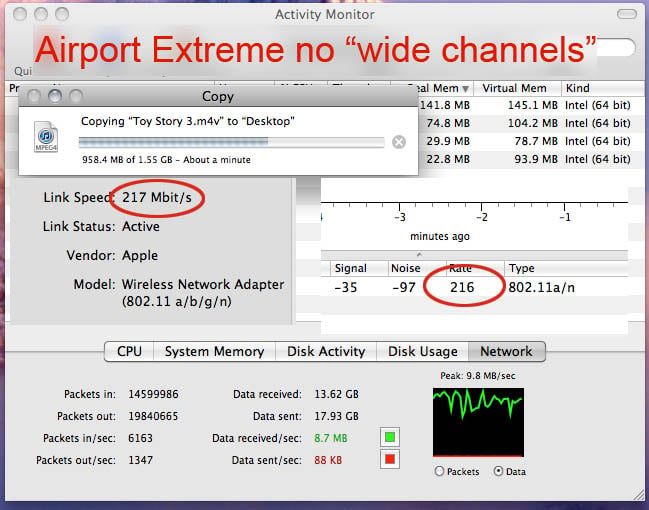 The interesting thing is that it's not just slower, but much more inconstant than the other two, with speed varying from 6 to 10 MB/s more or less...

Wednesday December 7, 2022 12:24 pm PST by Juli Clover
With the iOS 16.2 release candidate that came out today, Apple added the new Apple Music Sing feature that was announced earlier this week. We thought we'd check out the new karaoke feature to see how it works. Subscribe to the MacRumors YouTube channel for more videos. Apple Music Sing is available on modern iPhones and iPads, as well as the newest Apple TV 4K. It's built in to the Apple...
Read Full Article • 119 comments

Tuesday December 6, 2022 2:31 pm PST by Juli Clover
Apple is aiming to launch an Apple-branded consumer-oriented vehicle by 2026, and its goal is to hit a price point under $100,000 to make the car appeal to a wider range of customers, reports Bloomberg. Apple initially planned to design a car that might look similar to Canoo's Lifestyle Vehicle, where passengers could face one another in a limousine-style car with no steering wheel or...
Read Full Article • 322 comments

Thursday December 8, 2022 7:05 am PST by Joe Rossignol
iOS 16.2 is expected to be released next week following nearly two months of beta testing. With last-minute additions like Apple Music Sing and Advanced Data Protection, the software update now has over a dozen new features for the iPhone. Below, we've recapped many of the new features coming with iOS 16.2, including Apple's new whiteboard app Freeform, two new Lock Screen widgets, the...
Read Full Article • 73 comments