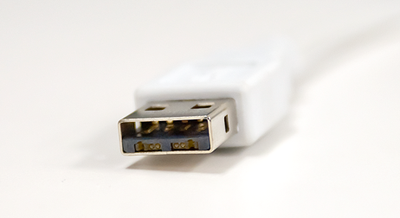 Prototype Light Peak connector image from PCPro.co.uk
CNet reports that Apple is expected to announce a "new high-speed connection technology" soon, according to a source.

Apple is expected to adopt this Intel technology in the near future--but likely use a name other than Light Peak, a source familiar with this aspect of Apple's plans said. Intel has said in the past that the first products using Light Peak should appear in the first half of 2011.

While Intel has used the name "Light Peak", Apple will apparently brand the connection under another name.

Light Peak is significantly faster than USB 3.0, which may explain Apple's reluctance to adopt that standard if Light Peak is just around the corner. It's not clear if next week's MacBook Pro announcements will be related, but there were vague hints that the MacBook Pros would have additional enhancements beyond the upgraded Sandy Bridge processors.

It appears the GigaWire trademark Apple filed back in 2001 has been abandoned, so that's not going to be it.

Sunday May 16, 2021 2:39 pm PDT by Eric Slivka
The Browse tab in the Music app across Apple's platforms has started displaying a prominent teaser hinting at an upcoming major announcement for Apple Music. Under the heading "Coming soon," the headline says "Get ready – music is about to change forever." An accompanying "Tune-In Video" simply shows an animated Apple Music logo. Rumors have indicated that Apple is preparing to launch a...
Read Full Article • 127 comments