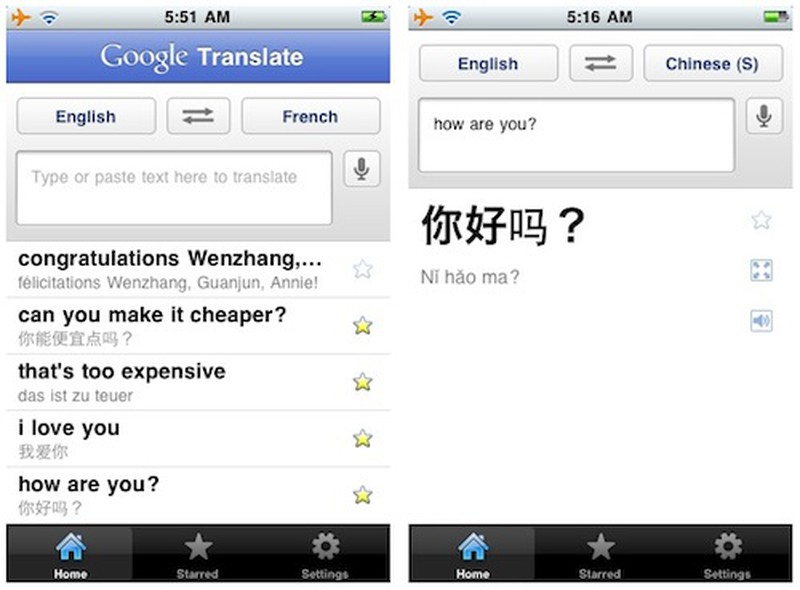 Google today announced the release of a new Google Translate [App Store] application for iOS devices, offering such features as translation of spoken words and phrases and the ability to listen to translations spoken aloud.

Speak to translate
The new app accepts voice input for 15 languages, and - just like the web app - you can translate a word or phrase into one of more than 50 languages. For voice input, just press the microphone icon next to the text box and say what you want to translate.

Google Translate also offers the ability to enlarge translated text to full-screen size for ease of reading and showing to others.

The new app release comes just after yesterday's launch of Priority Inbox for Gmail when accessed through the web app interface for mobile devices. The popular feature that rolled out for the standard Gmail interface late last year automatically identifies important messages and flags them for priority review to help wade through ever-increasing amounts of email.

Priority Inbox helps combat information overload by automatically identifying your important messages so you can focus on those first. Until today it was only available on the desktop and on Android devices.

Now, once you set up Priority Inbox in the desktop version of Gmail, you'll see Priority Inbox sections when you visit gmail.com from your phone's browser and click on the 'Menu' screen. You'll also see importance markers in your inbox, so you can quickly identify which messages are important.

Thursday May 28, 2020 8:13 am PDT by Eric Slivka
With the release of macOS Catalina 10.15.5 and related security updates for macOS Mojave and High Sierra earlier this week, Apple is making it more difficult for users to ignore available software updates and remain on their current operating system versions. Included in the release notes for macOS Catalina 10.15.5 is the following:- Major new releases of macOS are no longer hidden when...
Read Full Article • 317 comments