With Verizon set to launch the iPhone in just a few weeks, analysts have been attempting to estimate just how many units Apple might be able to sell through the carrier during the first year, with many analysts projecting the number to be in the range of 10 million units and reports of Apple preparing for shipments of 25 million CDMA iPhone units worldwide suggesting that the estimates may at least be in the ballpark. 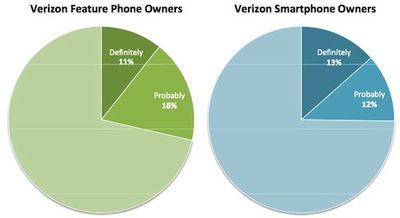 But according to All Things Digital, one analyst has gone out on a limb to note that Verizon might be able to sign up as many as 25 million iPhone customers over the first year, if Apple can make the units quickly enough. According to R.W. Baird analyst William Power, surveys of current wireless customers reveal that substantial numbers of both current feature phone and smartphone users say that they are "probably" or "definitely" going to purchase a Verizon iPhone soon after the device's launch.

- 29 percent of current Verizon feature phone owners said they will "probably" or "definitely" upgrade to the Verizon iPhone in the next three months. The carrier has roughly 64 million postpaid feature phone users, so that's 19 million potential iPhone upgrades, assuming eligibility.

Grand total: 23.8 million potential Verizon iPhone salesfrom the carrier's installed base alone. Add to that the 5.6 percent of current AT&T iPhone users who told Baird they planned to switch to Verizon and that number rises to nearly 25 million.

Surveys of future buying plans are of course subject to a fair degree of error when it comes to predicting actual results, as some customers will undoubtedly fail to follow through on their stated plans. Taking into account that factor, as well as constraints on Apple's production capacity and the eligibility of surveyed customers to upgrade at the best pricing, Power is maintaining an estimate of 10 million Verizon iPhone activations in the first year, but the survey result do indicate incredible awareness of and interest in Apple's smartphone offerings.