Much has been made of the new four- and five-finger multi-touch gestures for the iPad introduced in the first beta version of iOS 4.3 released last week, and many users were disappointed to learn that Apple had clarified in the second beta released yesterday that the new gestures are being included only for developer testing at this time and will not be present in the public release of iOS 4.3.

While the many-finger gestures seem natural on the iPad, some have been wondering whether the gestures could make their way to the iPhone and iPod touch or whether the significantly smaller screen size on those devices would make such gestures too difficult to use.


As noted by Engadget, one user has managed to get the advanced multi-touch gestures working on his iPhone, posting a YouTube video demonstrating that the gestures do indeed work on the smaller device although the screen appears to result in a cramped user experience when attempting to employ them. 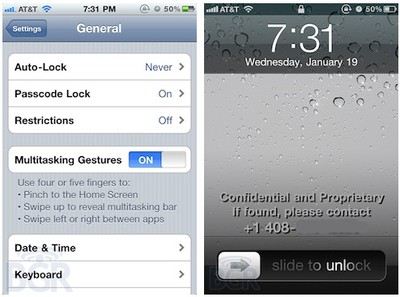 Apple unsurprisingly may also be testing the new gestures on the iPhone if screenshots obtained by BGR are indeed genuine. The report's source has reportedly shared screenshots from an internal Apple test model of the iPhone 4 showing a special build of the iOS 4.3 beta with the four- and five-finger gestures enabled.