One of the major new features deployed in iOS 4.2 last week was AirPlay, Apple's solution for streaming video, audio, and photos from portable iOS devices to the new Apple TV for display on users' televisions. Unfortunately, the feature's debut came with a few more limitations than users had originally hoped for, with streaming from third-party applications and even Safari limited to audio-only.

While some hackers have been able to discover how Apple has coded the restrictions on video streaming and ways to work around it in a proof-of-concept implementation, mainstream users would obviously prefer Apple to offer full-fledged support for the feature on third-party apps through a public API developers could use for their apps. 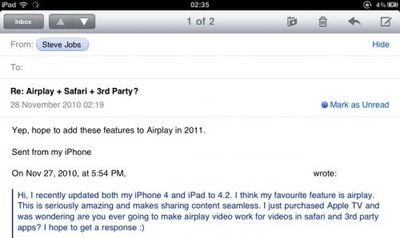 One MacRumors reader emailed Apple CEO Steve Jobs about the future of video streaming via AirPlay and reportedly received a response noting that Apple hopes to bring additional functionality to AirPlay sometime next year.

Q: Hi, I recently updated both my iPhone 4 and iPad to 4.2. I think my favourite feature is airplay. This is seriously amazing and makes sharing content seamless. I just purchased Apple TV and was wondering are you ever going to make airplay video work for videos in safari and 3rd party apps? I hope to get a response. :)

The AirPlay functionality appears to have a few other quirks as well, as noted by Daring Fireball's John Gruber. One such quirk involves the fact that the iPhone 4 is unable to stream via AirPlay video shot directly on the iPhone.

The most obvious shortcoming: You can't use AirPlay to play videos shot on your iPhone. That's an obvious feature, right? Shoot a video on your iPhone, then play it back for family and friends on your big TV via AirPlay. No syncing, no docking, no moving files around. Just hit play. But it doesn't work in iOS 4.2.1 - even though you can use AirPlay to show still photos from the Photos app.

While some had theorized that the issue was related to bandwidth required to stream the high-definition footage shot on the iPhone 4, video footage shot on the device and then synced to iTunes and back to the device will stream via AirPlay. Gruber theorizes that Apple had to roll out incomplete AirPlay functionality in order to meet its goal of releasing iOS 4.2 by the end of November and that we will see increased functionality coming in the future, as Jobs' purported email suggests.

iGraham4
Haha This is my email!!!

I sent it to him on Saturday and got a very quick reply :D I cannot tell you how delighted I was to get it :). Really can't wait to have airplay in every app!!!
Score: 1 Votes (Like | Disagree)
Read All Comments