Apple's Trademark for 'There's an App For That' Approved 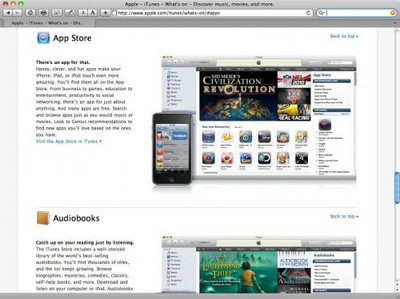 Apple's screenshot submitted as evidence of tagline's use
As noted by TUAW, the U.S. Patent and Trademark Office (USPTO) is moving to approve a registered trademark for Apple's much-used advertising tagline for the iPhone and App Store: "There's an app for that."

Apple initially filed for the trademark in four separate classes in December 2009, and was granted initial allowance for the mark in May of this year, although the company was still required to provide evidence of its use in commerce for the registration to become finalized. In August, Apple moved to divide the trademark application into two separate applications of two classes each, and also filed the required "Statement of Use" evidence that it was using the trademark in commerce for one of those divided applications.

Late last week, the USPTO granted Apple's request to divide the application and by Friday the government attorney in charge of Apple's application had signed off on the Statement of Use and authorized the trademark for final registration in the following classes:

While Apple has used the tagline extensively in its own advertising, the slogan has also been mimicked and parodied by a significant number of outlets, perhaps most notably by Verizon in its "There's a Map For That" ad campaign targeting AT&T's 3G network coverage.

Sunday August 1, 2021 6:21 am PDT by Sami Fathi
Models of the Apple Watch Series 6 with titanium cases part of the "Apple Watch Edition" collection is currently widely unavailable for pick-up in several of Apple's retail stores in the United States and is unavailable entirely for delivery in major markets. Noted by Bloomberg's Mark Gurman in the latest edition of his "Power On" newsletter, titanium models of the Apple Watch Series 6,...
Read Full Article • 144 comments