The most obvious feature is the use of movable Panes that allow you to actively manipulate content around the screen. Panes can be swiped left/right to move to cover or expose other panes and works surprisingly well. 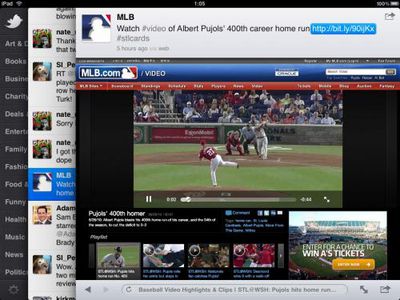 What Twitter has done is create an amazing user experience for reading information. This is thanks to an intuitive user interface that layers on top of itself. So, for example, if I click on a link in my tweet stream, Ill have a new layer that rolls over to show that webpage in a customized browser window. If you've used Flipboard, it's somewhat similar, but better because its much easier to go back to where ever you previously were before you clicked the link. You simply swipe something to the side to move it temporarily or swipe it again to get it off the screen (in portrait mode anyway, where there's less space).

Beyond that, the Twitter app also incorporates multi-touch gesture support to provide useful but more hidden functionality. Pinch-zoom can be used on a tweet to get more details about the user. Meanwhile, two-finger drag down on a tweet instantly shows the previous replies.


Even if you're not a regular Twitter user, it's probably worth a peek to see their take on an iPad user interface. As Engadget notes, we also expect other iPad apps will start adopting these user interface features.